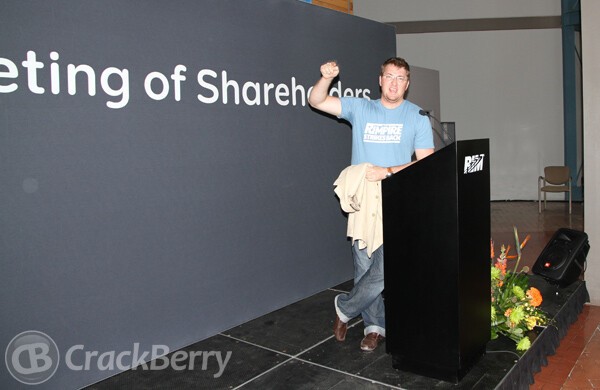 It's time for my annual pilgrimage to Waterloo, Canada, the birthplace and hometown of BlackBerry, to attend the company's Annual General Meeting of Shareholders.

This will be my fourth year attending the AGM and John Chen will be the fourth CEO to take the stage in as many years. We were there for the end of the Mike Lazaridis / Jim Balsillie co-CEO reign and we were there for the Thorsten Heins era has he worked to bring BlackBerry 10 to market. This year we'll hear from John Chen, now just over six months on the job, as he works to rebuild value for shareholders.

John Chen came into BlackBerry as an outsider —there was no internal promotion here as there was with Heins — which I think most shareholders agree was a wise decision. It's clear he's going to do whatever it takes to find shareholder value, even if and when that means making tough decisions. Chen has been consistent in his interviews and messaging throughout his time as CEO that he'll look at all options and opportunities. There's no internal "baggage" holding him back on making changes.

Given where BlackBerry's share price has been the past few years, I've always walked into the AGM expecting a shareholder bloodbath of sorts, but it has always been the opposite. I have mainly witnessed support from the shareholders in the room, who clearly want to see their local tech success story not only survive, but thrive once again. I hope to see that local support next week as well, but it's also clear now that BlackBerry is a very different company than it was - there have been a LOT of layoffs in the past year in the Waterloo region and across the company (necessary, but hard). Many, many people have been affected by the changes.

Last year, Thorsten Heins used the AGM as an opportunity to present his plan on how he would restore BlackBerry to profitability. It will be very interesting to see how Chen uses his time on stage this year, especially given the AGM is on the same day as the company reports its Q1 2105 earnings. The market will undoubtedly be reacting to that news while the AGM is taking place.

What questions do you want me to ask?

As I type this we're still putting together my itinerary for my Waterloo / BlackBerry HQ visit. Like last year, I want to head to Waterloo armed with the questions that CrackBerry readers want answered. Given that the earnings report is happening the same day as the AGM, I think John Chen's time will be at a premium, but hopefully I'll be able to get some of those questions answered if they're not already addressed throughout the day.

On that note, let me know in the comments the questions you would be asking if you were able hit up the AGM next week. I'll do my best to return home with answers!