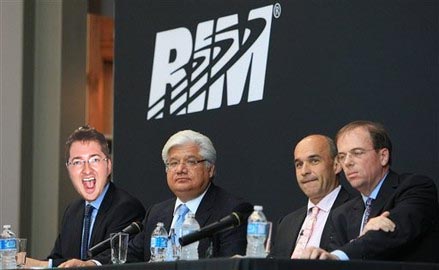 [ If I Ran RIM is a new editorial series by CrackBerry's Founder and Editor In Chief, Kevin Michaluk. It looks at the things he would be doing if he were on the senior management team or board of directors at Research In Motion ]

Companies have feelings. Well, that's not quite true. People have feelings. But companies would not exist without people. And on a week when Research In Motion's share value is trading at a 7 year low, my hunch is that a lot of RIM employees are feeling pretty down in the dumps.

If you read BlackBerry: The Inside Story of Research In Motion, there's a good story in the book that tells of how RIM's Co-CEO Jim Balsillie effectively banned employees talking about RIMM share price at work. If you got caught breaking that rule, you had to buy donuts the next day for EVERYBODY (an expensive fine, especially as the company grew to have thousands of employees!). Jim's take was that going public was just a way for the company to raise money to execute its vision - worrying about the day to day value shouldn't distract from the company's longer term goals and mission.

Whether the donut clause is still in effect I honestly don't know, but I do know that regardless of not being allowed to talk about it at work, share price and media sentiment is something that every employee is accutely aware of. Emotionally, it's very different to jump out of bed in the morning and go to work for a company whose share price is skyrocketing and is getting nothing but praise in the media vs. rolling out of bed to go to work for a company whose value is plummetting and getting ripped apart in the press. Whether it's sports, business or war, I think most people prefer to be on the side that's winning.

I don't know what thoughts first go through Jim Balsillie or Mike Lazaridis' minds when they wake up each morning, but if I were in their position of RIM Co-CEO right now I'd be going to work each day with the mentality of a general going into battle. Whether they acknowledge it or not, RIM is currently at war and they are coming under attack from their mobile adversaries on all sides.

In addition to having a solid strategy, to win a battle you need loyal soldiers on your side who are willing to fight to the end, whatever the outcome may be. And when the going gets tough, loyalty and determination is that much more important. An inspirational general can rally his troops to overcome obstacles and beat the odds. RIM needs its best employees to be inspired right now, on point and on a mission... not browsing the web when at home at night checking out job postings just in case.

So If I Ran RIM, the thing I would be doing RIGHT now is be communicating to my people. I would rally my troops. All of them. A lot of things have changed and are changing at RIM right now. There were layoffs. There was a corporate restructuring. There's a new technical strategy. RIM needs all of its teams functioning 100% right now and with so much corporate change taking place communication with people at every level of the organization is key. You can't leave people hanging, wondering what they're supposed to be working on today and wondering how they'll fit into the organization RIM is working towards becoming under the BBX platform.

Heck, even though I don't run RIM nor am employed by them, I took BlackBerry DevCon as an opportunity to rally the troops. Every BlackBerry employee I bumped into during the week, I gave them a pep talk followed by a more stern "you'd better not f*?king quit on me! I need you right now at RIM! If you quit I will hunt you down and make sure you never work for anybody again." Well, maybe my little pep talks were more threatening than inspiring, but I think the message either way was the same.

I've seen RIM lose some good people these past few months and I don't want to see that trend continue. I hope RIM's management is doing a good a job of communicating and inspiring its people throughout the organization to get on task with the mission at hand. That's one of the many things I'd be doing, If I Ran RIM. There's a lot of other things I'd be doing too -- topics of future editorials -- but they don't matter unless you have people onboard to execute.