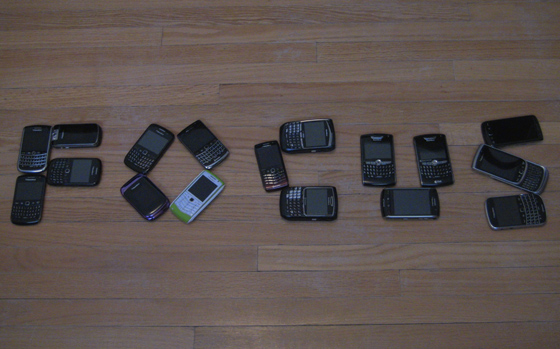 [ If I Ran RIM is an editorial series by CrackBerry's Founder and Editor In Chief, Kevin Michaluk. It looks at the things he would be doing if he were on the senior management team or board of directors at Research In Motion ]

With the troops rallied and ready for battle, it's time for Research In Motion to buckle down and "git-r-done." But more important than working hard is working smart. It's not just a matter of RIM getting things done, but getting the *right* things done. As RIM works through their tech transition from the BlackBerry OS to BBX platform, RIM needs to FOCUS. Even though RIM is a big company with thousands of employees and therefore has the resources to tackle a lot of product initiatives, I think most people reading this will agree that right now it's more important for RIM to do a few GREAT things than it is to do several GOOD (or sub par) things. Sometimes less is more. RIM's best people need to be focused on delivering RIM's next great product, and anything that distracts from that needs to be cut out.

When Steve Jobs returned to Apple when it was on the brink of ruin, the first thing he did was focus the company. He killed off every product and initiative that wasn't integral to the company's success going forward. That strategy worked out pretty well for Apple in the years since.

With their iPhone, Apple has to date taken the notion of focus to the extreme, having yet to offer more than one form factor variation of the current generation device model. The form factor is always the touchscreen slab. You can pick your color -- white or black -- and internal memory. That's not a lot of choice for consumers obviously, but the benefit for Apple here is that the entirety of the iPhone development team is focused on turning out that single next generation device model. And that ability to focus on the development side ultimately results in a product that is pretty polished and well received.

In comparison over the years, RIM has taken the opposite strategy, giving customers almost too many options to choose from. Some of this choice came from RIM wanting consumers to be able to pick their form factor of choice and to offer segmentation in pricing from high end (Bold) to low end (Curve), while some of the differentiation in device models has been the result of working on different chipsets (CDMA vs. GSM devices) or in offering carriers an exclusive that they want (Storm).

Does over 30 BlackBerry models compared to Apple's three constitute a lack of focus for RIM? On one hand, it's hard to argue with RIM's success over the years - obviously their strategy paid off for a long time. On the other hand, that strategy caught up with them. I've said on many CrackBerry Podcasts that the day the original iPhone was announced in 2007 that RIM should be begin working on their next generation OS. Instead, RIM's development teams went to work continuing to pump out iteration after iteration of mainly-similar BlackBerry in multiple device families.

Looking back, I can't help but think RIM would be even further ahead today if they had kept their focus a little tighter, putting more of their energy into furthering the platform sooner rather than spreading themselves thinner by pumping out so many devices.

History is history, so the thing to do now is look forward. I already think RIM is taking this notion of focus to heart. With BlackBerry 7 we've seen a *slight* condensing of the product families. I don't think we'll see a BlackBerry Pearl or BlackBerry Style running on BlackBerry 7. That said, we are still seeing a LOT of styles of BlackBerry Smartphone get introduced -  the physical keyboard Bold 9930/9900, the full touchscreen Torch 9860/9850; the Torch 9810 slider; the full keyboard Curve 9370/9360/9350; another full keyboard Bold 9790 and another full touchscreen Curve, the 9370.

I do think people like having choice, though I find most people who come to me asking for advice usually just ask the question What's the best BlackBerry to buy right now? Apple makes it easy by giving no choice - you buy whichever one is newest, unless you're really needing to save cash and buy a generation older version. Android (a platform, not a manufacturer) is a complete mess as there's simply way too many choices - unknowing people just buy whichever model the salesperson pushes at them that week. I think moving ahead with RIM's next generation of QNX-based BBX BlackBerry Smartphones (or SuperPhones or whatever), RIM needs to keep things focused and offer just the minimum and most logical number of devices they need for basic form factor choice.

RIM needs their high-end full qwerty flagship. That's a must for the core BlackBerry user. Take the Bold 9900, make the touchscreen 25 - 30% taller, make the battery life last longer and put BBX on it and you're done.

RIM needs a full touchscreen. That's what the consumer market wants right now. And that will likely be the first one we see hit the market.

While a solid full qwerty and full touchscreen are a MUST for RIM, after that things are less clear. I think there's a lot of people who like the Torch slider, but if building a slider is going to distract from building a better next-gen full touch or full qwerty, it would be a sacrifice I'd look at making.

A lot of RIM's success has come from their low cost devices, like the Curves. For the next little while as BBX phones emerge, it seems that RIM will continue to offer BBOS devices and likely keep that going as their low cost international play. At some point they will want to target low cost with BBX phones too. Is it better for RIM to purpose build a low cost BBX Smartphone, or is it better to let the low cost market be served by the previous generation of high-end device as Apple has been doing? Tricky question and it's one that would take some number crunching to answer concretely, but again I would bring it back to focus. Address the low end of the market in a way that best allows RIM to focus on pushing the platform ahead while delivering the best consumer experience to the low cost market.

Bottom line: In the past RIM put too much effort into turning out a bunch of device models that were mainly similar or devices that were too far outside of RIM's core, which took energy and dollars that could have been better put into raising the bar of the platform and future devices. If I Ran RIM, going forward with BBX Phones I would FOCUS the product line down to the bare minimum, and put those extra resources into pushing each new generation of product that much further ahead.