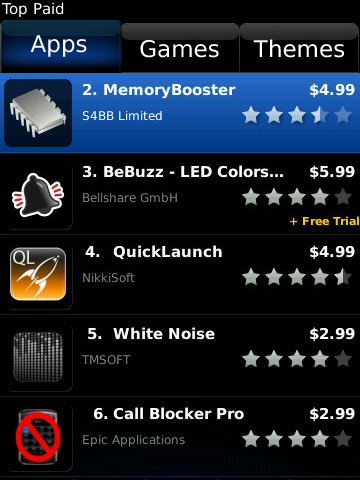 If you didn't catch my article titled How Are You Liking Theme World So Far? I recommend you go read it before continuing with this post if you want the full understanding of where I'm coming from on this. To summarize, while 89% of our poll respondents are happy to see themes finally come to App World, 85% of those same respondents think RIM got the implementation of themes in App World wrong (myself included). In RIM's App World, themes are currently treated the same way as apps. While themes do have their own category, they compete with apps for rank on the Top Paid and Top Free download pages and are side by side with apps in sections like the Featured Items carousel (and we've already seen themes also creep into non-theme categories like Entertainment > Personalization).

The Issue: While the current implementation does provide solid visibility for themes within App World, it confuses the browsing experience for the end-user and it also hurts app developers. Following the original post, I received a ton of emails from both app developers and theme developers on this subject and the post itself generated a lot of insightful comments, basically all of which confirm the issues put forth. Since my initial post on this subject, I have confirmed that some developers have already seen a substantial drop in App World sales since themes went live (think nearly a 3/4 drop in downloads/sales when you get punted off the Top Paid list by a theme). And while putting themes into App World is GREAT THING for theme developers as it opens up a whole new market for them, all but one of the theme developers I have spoken to recently thinks the current implemenation is good. Just as app developers would rather compete against apps for rankings, theme developers would rather compete against themes. A theme developer would rather say I have the #2 downloaded premium theme in App World vs. saying I have the 7th most downloaded app.

The Solution: While writing my initial post, I hypothesized that there must be a solution out there that would give equal benefit to both app and theme developers without them cutting into each other and cluttering up App World. 24 hours later, I have a better vision of what I think would work for App World and am throwing it out there. You can see it in the App World mockups I put together here.

My thought is to do in App World what we do here on the CrackBerry blogs when it comes to this type of core content - we break it apart. Back in the day we used to have just a single blog post category called 'BlackBerry Software' that covered all of this sort of content, but with time we got smarter and separated it into BlackBerry Apps, BlackBerry Games and BlackBerry Themes. To me, these are the three key silos that a BlackBerry user seeks out in an app store environment. You could argue BlackBerry Themes is a subset of device personalization (ringtones and wallpapers fall into personalization too), and in reality it is, but from a visibility/demand perspective you wouldn't want to push themes down into a subcategory.

Looking at the App World mockups in this post, you can see how I forsee this theory in action, adhering to App World's keep it simple philosophy:

And lastly, I think on the App World homescreen, we could more clearly identify what main area (apps, games or theme) a Featured Item falls into. Right now, it's not always clear whether the featured item you're looking at is an App or a Theme. Most of the themes say theme in the title, but in some cases, such as the Pooh Winter Fantasy - Animated Theme that's showing in the Featured Items section on my Bold 9700, the word Theme is cut off. The first time I saw this in the carousel I was thinking it was maybe a Disney Pooh Game (w00t!). Once these three areas of apps / games / themes are established in App World, then you could show an even number of Featured Items on the homescreen category (3 or 4 or 5 from each) and make sure they're clearly labeled as either Featured App, Featured Game or Featured Theme.

** Keep in mind I'm only touching on changes I'd like to see in the frontend App World client itself. We'll save the backend things that theme/app devs would like to see for another day. **

Conclusion: So that's it. What do you think? You can express your thoughts as a comment to this post or vote on our poll at the bottom. And if you like the suggestions and think they're good and RIM ultimately likes them and one day your App World looks like the mockups here, just remember where you read it. We have our own CrackBerry App Store and CrackBerry Theme Store clients and of course we would love for all of you reading this to support our CrackBerry community by grabbing your apps and themes from us (and tell your friends to give us a download from crackberry.com/appstore), but at the end of the day I just want what's best for the BlackBerry app/theme developer community and the BlackBerry platform as a whole. The way App World is organized right now isn't optimal for developers nor customers. So let's fixxer up!

More Captures of BlackBerry App World According to Kevin

Click into Categories and you can choose between Apps, Games or Themes

App World Poll - Would You Like to See This?