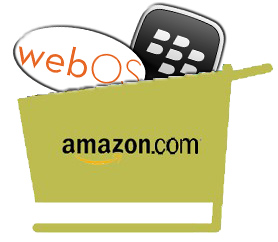 Amazon made a big splash this week in the tech world with their announcement of the Kindle Fire.  The hardware looks practically identical to a BlackBerry PlayBook, running an Android OS that's been dumbed down to deliver a "content consumption" experience with a dirt cheap starting price of $199 (I preordered a Kindle Fire - will do a PlayBook head to head as soon as it arrives).

The week isn't over, and again Amazon is making headlines, this time via a VentureBeat rumor that Amazon is in talks to pick up the webOS platform from HP, who is looking to do something with it (they already stopped making webOS devices).

Earlier in the week I saw some reader comments/forum posts here on CrackBerry following the Kindle Fire announcement saying that Amazon should just buy RIM already. I'm not going to put together a 10 Reasons why Amazon should buy Research In Motion post on this (I almost got shot by you guys when I suggested Google buy RIM), so this time around I figured I would toss the idea out there to see what the CrackBerry community thinks.

Obviously I want to see the RIMPIRE Strike Back on their own, but I can definitely see a few reasons why that sort of an acquisition by Amazon could mean good things for both companies.  I can also see some big reasons why it wouldn't work so well. Of course, webOS would be cheaper for Amazon to acquire than RIM, and over on our sibling site PreCentral.net, Derek pointed out the reasons as to why an Amazon acquistion of webOS could make sense. So that brings us to the...

Question of the Week: Assuming Amazon is going to acquire a mobile platform, should it be webOS or BlackBerry? Sound off in the comments with your thoughts and reasoning. Should be a fun one (and please, keep the commentary civil!).