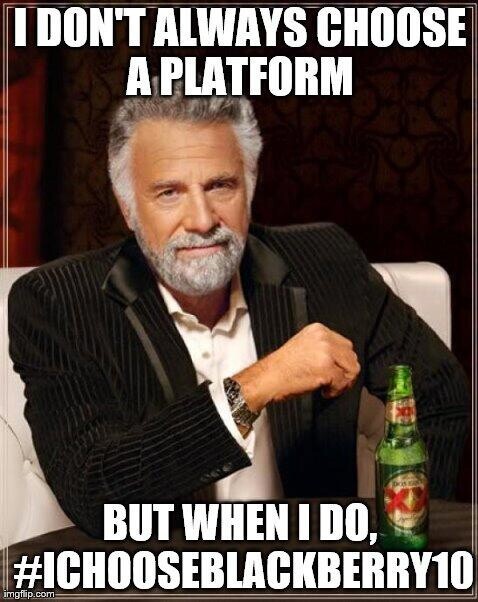 If you've been in a funk lately due to uncertainty surrounding the future of BlackBerry THE COMPANY... it's time to snap out of it and focus on the now as we've got some serious BlackBerry 10 love to spread throughout the land.

Following in the footsteps of the #BlackBerryByChoice and #BB10Believe twitter campaigns of the past year, members of the CrackBerry community took to the twitters with a new hash tag this weekend in #IchooseBlackBerry10.

Watching the tweets roll in and seeing the passion of BlackBerry users out there rallying behind the new hash tag, I know it's helped snap me out of my funk. It's not blind fanboyism driving this. It's BlackBerry users being champions for the product they love as it's best for their needs. It's not about hiding from the business challenges and work to be done by the company, but focusing on the product available now and the awesome work that has been done.

#IchooseBlackBerry 10 because the Hub is the shiz and the CrackBerry community is the BEST!

I know I've been in a bit of a funk lately as I wrap my head around the BBRY business side of things, but the passion for BlackBerry shown by guys like Kris Simundson and James Nieves and tons of other BlackBerry owners out there in recent days has reminded me of what got CrackBerry launched in the first place. It was pure love for the product. Heck, I owned a BlackBerry for two years before I even found out it was made (at that time) by a company named Research In Motion.

The mission on this one is simple. Take to twitter. Take to instagram. Take to facebook. Take to youtube. Take to whatever social site you frequent and start using the #IchooseBlackBerry10 hash tag on your posts. We're not making this into a contest (it's a movement!), but we will be watching contributions and recognizing the ones that stir us the most.

The Memes are Starting to Roll in too.... keep em coming! And let's see some new fan videos too!!

It only takes a thousand people to start a big movement, and there's many times more of us here than that. So go forth my friends and spread the hash! :)