When I first wrote about HTC's new Vive XR Elite headset last week, I was skeptical. Not that it wasn't good, but that it was something I would want. Yeah, HTC checked a lot of boxes with this latest headset and implemented some new tech, but would it be worth the $1,100 price tag?

I've been watching VR mostly from the outside since the first consumer devices started coming out. The early days were really cool, but also really difficult. There were attempts to make it work just using a smartphone as the screen, controller, and computer, and on the far opposite end of the spectrum there was HTC releasing a head-worn display that was tethered to a high-powered computer with a bundle of cables and tracking beacons you had to mount around a room.

VR has come a long way since those early days, and the HTC Vive XR Elite is evidence of that. I won't go into all the specs (read the other post for that), but I do want to talk about my brief experience using it. 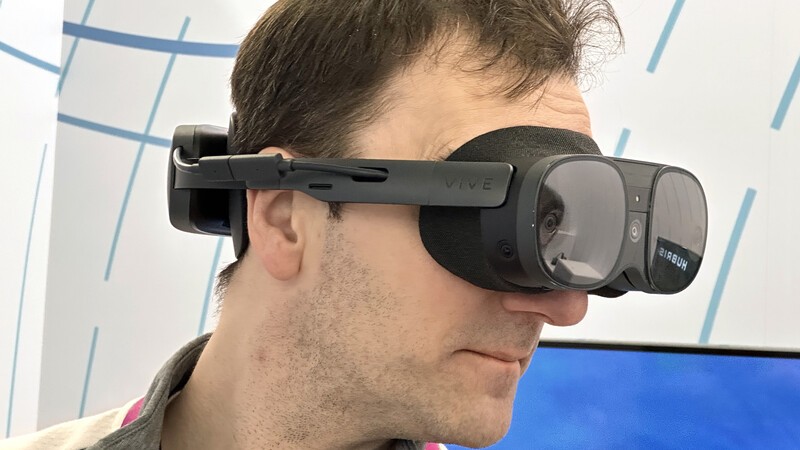 First up is comfort. By removing the tether to a computer the Vive XR Elite feels so much more free. Being self-contained makes a huge difference — but when the included Qualcomm XR2 processor isn't up to what you want to do you can still hook up to a more powerful PC with a single USB-C cable. The whole assembly is very comfortable to wear, even with the battery pack attached. It mounts around the back of your head, which actually helps to balance the headset evenly. A quick twist of the knob ratchets the whole thing snuggly in place, with a comfortable cloth gasket to block out the outside world. Even with more vigorous activity I kept the headset sec

But the key selling point of the Vive XR Elite is that it can bring that outside world into the headset with a front-mounted camera. The dual square 2K displays are very sharp in AR, and while the RGB camera on the front sports a pretty decent 16MP resolution I found that the rendering of the outside world it presented for augmented reality was a bit on the blurry side — there's no doubt plenty of morphing of the image to ensure it displays correctly through lenses, which distorts the image quality. Perhaps that can be fixed with software, but it could simply be a limitation of the resolution HTC is working with here.

Regardless, I found the AR component really nicely executed. When I looked around the room and people around me were faithfully rendered and placed, as were my own hands. I could naturally carry on a conversation and interact with the world. I walked around and grabbed things with my hands and it all felt very normal after just a few seconds. When you're that person on the outside having that interaction it can feel a little weird, though — my instinct is that they can't see me because I can't see their eyes.

The motion tracking was excellent, and the brief time I spent doing controller-free hand tracking was also very good. And the VR was still excellent. One game I tried slowly merged the AR world where alien-spewing portals first appeared mapped on the walls of the booth and then slowly the real world was fully taken over by a virtual one. And sometimes it's the simplest VR that is the most mind-blowing: a rendering of the supporting structure of the Notre Dame cathedral's roof had me audibly going "Wow" while standing on a virtual ledge made my lizard brain fear of heights kick in and I just could not step forward even though I was absolutely certain there was still real world floor in front of me.

VR has come a long way in a relatively short time, and I look forward to seeing where it will evolve next. I'm not sure there's a "killer app" for VR or AR just yet — and it's almost certainly not Zuckerberg's "Metaverse" — but experiences like the HTC Vive XR Elite will be exactly what it takes to get us there.

This might be the best VR headset we've seen — and this one also includes AR. It's hard to argue that HTC Vive isn't the top dog in VR, and the Vive XR Elite pushes the boundaries even further.