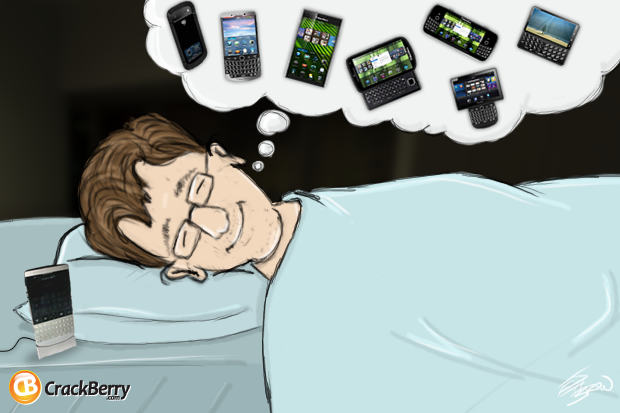 Just woke up from an awesome dream. I hope in my life the day comes where I can re-watch them in video after I wake up.

As dreams tend to be, my awesome dream yesterday was a bit of a mashup. My weekend was spent reading The Hunger Games and constantly thinking about CrackBerry.  In my dream I was battling it out against a bunch of iZombies w/ my BlackBerry 10 powered BlackBerry Blade in a fight to the death. Seriously, I can't make this stuff up (apologies go to all the iZombies I decapitated).

Back to reality, I honestly can't wait for BlackBerry 10 phones; I believe that if done right, this could be the first mobile phone that offers no compromises. Back in 2009 I wrote my theory on CrackBerry Kevin's Smartphone Hierarchy of Needs. If you have never read it, go read it now. My basic conclusion back then was that if you truly wanted a no compromise mobile experience that you would need to carry two phones with you: a BlackBerry - as it's the ultimate solution for communication and security - and another device -- such as in iPhone, or now a tablet -- for the best app and game experience.

This week our pal Al Sacco put up an article on CIO.com making the case for carrying two smartphones, which almost three years later, backed up my conclusion. To this day every phone on the market is compromised in one way or another. BlackBerry 7 phones still offer the best communication experience, but fall short on the app experience. iOS offers a great app experience, but compared to BlackBerry is inefficient at getting so many of those daily tasks done quickly. Android is somewhere in the middle, but it suffers from  a lack of security and poor battery life (and things vary so much model to model).

When I travel to the US I often carry two phones. On a recent two week trip, I had with me both my P'9981 (roaming on AT&T from my Rogers SIM card) and also an AT&T iPhone 4S, with a US number. Carrying both devices on me at all times just reinforced this case for carrying two smartphones. The BlackBerry experience is so much better for that on the go functionality - checking emails, replying to SMS, doing quick web searches. Yes, part of it is the keyboard, but a bigger part is just the way BlackBerry prioritizes the communication experience on BlackBerry. It's designed to be used 100x per day for 20 seconds a time. Use it and get back to life. Where I would yank out the iPhone was for those stop and use activities, such as browsing a website or firing up Google Maps. Plus some app experiences (like OpenTable), are just smoother on the iPhone. The way I use my mobile device the 80% of things I do regularly, I do faster on my BlackBerry, which is why I can never live without it (I never can go to a slower solution). But I do long for the 20% of things where in this case, the OS experience seems to do a better job.

Add it up, and I can't wait for BlackBerry 10. Anybody who has used the BlackBerry PlayBook knows that the next generation BlackBerry platform is POWERFUL and that the overall experience is so much more smoother and simpler than any BlackBerry OS phone in the past. The app experience is MUCH better too. Put that platform into a phone, make sure RIM doesn't sacrifice the communication experience of the traditional BlackBerry OS, and fill in the app game, and seriously, BlackBerry 10 phones are poised to be the first phone that will make the case for carrying two phones obselete.