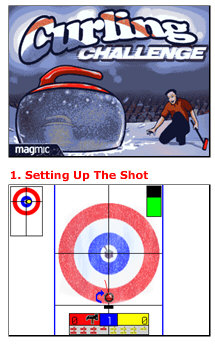 For all those BlackBerry-abusing Curling Fans out there (and yes we know you are mainly in Canada, and mainly in Winnipeg at that!), this week marks the 2007 Tim Horton's Brier, which this year is being played at the Copps Coliseum in Hamilton, Ontario (not that far away from RIM's headquarters!).

In honor of the occassion I thought I would bring everyone's attention to a game that's been on my berry for nearly nine months now - Curling Challenge. Having grown up in a rural town in the middle of Canada, I did a lot of curling in my youth, teens, and right up into my early twenties (there's not a lot to do during a Manitoba winter but Curl, Skate, and Snowmobile). As a result of my longstanding  committment to the sport (we'll cover that debate in another blog post, but curling IS an OLYMPIC sport), I skipped the trial period and paid the $4.95 for the electronic version upfront.

The game play is easy to learn. Setting up shots from the hack takes only a few clicks - choose your throwing weight on the meter with a quick click of the trackwheel, take your aim for the broom with a scroll of the trackwheel, and finally select whether you are throwing an in turn or out turn (if you're not sure what an in turn or out turn is it would probably be best to move onto the next blog post!). From there, the rock goes spinning down the ice, and unlike playing with with real people, you will never have to worry about missing the broom - the delivery and release is always nice and smooth.

Is the rock down on weight or running a little tight? Clicking the trackwheel gets the sweepers in full motion, as denoted by the hokey broom icon shown in the top right corner of the screen (seriously...I'm not sure if the graphics guys working on the game have ever seen a curling broom before, but the graphic they used made me laugh - it's more like a Mario Brother's-styled paint brush). It'll take a few ends to develop the aim and sweeping finesse to get a rock to the button or make a take out, but by the time you get to the 5th end break you'll be a sniper and showing that computer who's boss. You also have the option to pass the berry back and forth with a friend if you want to play against a person instead.

Where the game starts to fall short for me is on the realism.  I don't think anybody ran the ice algorithms passed Hans Wuthrich (world's greatest curling icemaker) for approval. He would surely have a heart attack (or the players would kill him) if the rocks at the World's last year curled the way they do in Curling Challenge. The curl towards the centerline with an in-turn/out-turn is fine, but once a rock crosses center LOOK OUT - it's into the boards before you know it.  Not even Steve Gould (known CrackBerry addict) and Ryan Fry on the brushes could hold these rocks straight. Suffice to say, making close-to-the board takeouts will be your greatest challenge. (Side Note - While we're on the topic of curling, incase you were wondering where our resident genius has been the fast few days, Tom has actually been in Hamilton working on the Brier ice - Tom designed the wireless environmental monitor system used at all of the top curling events.  Check it out at IceTracker.com.)

Rules such as the Free Guard Zone have been omitted from Curling Challenge, as well as the ability to sweep your competitor's rocks once they cross the back tee line. For people new to curling this won't be an issue, but assuming most of the people who will download/buy this game are familiar with curling, then I'm thinking this should be a consideration in the next release of Curling Challenge.

The last area to improve upon? Strategy.  This isn't the game to play if you're hoping to learn how to curl like Kerry Burtnyk. The computer is good at drawing to the button,  and if you miss your shots is good at piling more rocks in the house and even guarding them, but as soon as you make some hits, draw to the sides or throw up some junk the computer gets baffled and misses a lot.

Still, the game is a lot of fun!  In nine months of game play I don't think I've ever actually played a full game (I'm not even sure if they are 8 or 10 end games - I usually get tired by 6), but I have taken four 7-enders in a row and been up 34 - 0 after six ends so I think that could be written down as a victory in anyone's book.

For now I'm going to give Curling Challenge three stars out of five.  What would it take to make it a homerun?  Fix up the realism and make it playable over the wireless net. Man O Man, I know a lot of people who would spend days at their berries playing this if there was an online bonspiel mode.