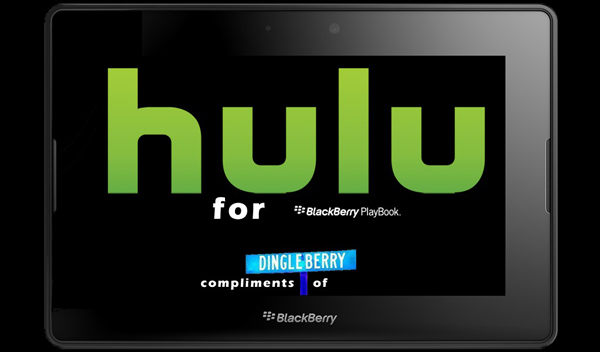 We've known even before the BlackBerry PlayBook first went on sale that it could support watching Hulu videos. Hulu was started as a joint venture between NBC Universal and News Corp (Fox) that allows US internet users to watch TV shows online. It's a great way to legally watch TV over the internet. The PlayBook's flash-running browser has no problem playing the videos; it's Hulu itself that blocks content to the tablet. Within 48 hours of the tablet's release, Hulu blocked PlayBook users from viewing that content.

DingleBerry 3.x changes that; Hulu is back on the PlayBook! Included with the latest release of the rooting tool is a new browser called HuluBerry. After following the extremely easy instructions for rooting the tablet, you'll find the HuluBerry application already installed on your device. This custom browser only browses the Hulu website. And Hulu looks great on the PlayBook.

Please note: As of late Wednesday night, it appears that the the 2.0.0.7111 developer's build of the PlayBook OS breaks HuluBerry functionality. To keep watching Hulu videos on your PlayBook, I would recommend staying on version 2.0.0.4869 or 2.0.0.6149

I found that videos load fairly quickly, though not quite as fast as on a desktop/laptop. Once the video had buffered, playback was smooth and looked and sounded perfect - even in full screen mode. A nice feature, the PlayBook stays active as long as HuluBerry is opened, i.e., the tablet doesn't go into standby while you're watching TV. I did notice that the HuluBerry would hang with certain Hulu commercials, but that happened rather infrequently.  A restart of the HuluBerry app solved the problem every time for me.

Between HuluBerry and the PlayBook's root, Hulu's servers are lead to believe they are streaming content to a browser running on a Windows machine and not the PlayBook tablet. I won't go into details - not that I have many - but the hack should make it a bit difficult for for the media company to block Hulu content played in the HuluBerry application.

Some users report that HuluBerry has stopped working on their BlackBerry PlayBooks. Oddly enough, it's not Hulu that has stopped working, but the root itself. This will always happen after restarting the tablet. There's no need to re-root the tablet, though. Once you initially root the PlayBook, a script is set to run whenever the device is connected to a computer with the PlayBook's Development Mode turned on.

So if HuluBerry isn't working, turn on Development Mode and connect your PlayBook to a computer. As soon as the connection is made (I usually wait until after I've entered my PlayBook password on the computer), the tablet is rooted once again. HuluBerry should work without troubles.