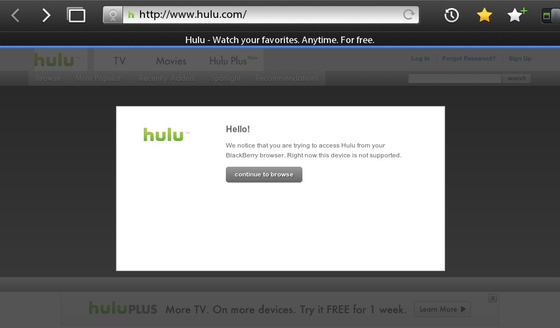 Some sad but expected news folks -- we've started getting tips in the forums and through the CrackBerry support tips line that Hulu has gotten a little cranky about offering content on the BlackBerry PlayBook. Although PlayBook owners previously have had access to all movies and TV shows it now looks that Hulu has added the BlackBerry PlayBooks browser string to their blocked list.

Overall, it's not really a huge surprise that they have done so but rather more frustrating and annoying that big media can't see the advantages here for end users. If you live in an area where the content is licensed for -- it really shouldn't matter on how you access that content. Hopefully, it'll work out in the end though and hulu will realize they just simply need to make an app for the Blackberry PlayBook that allows access. Thanks, to eveyone who sent this in!

Discuss the Hulu blocking in the CrackBerry Forums