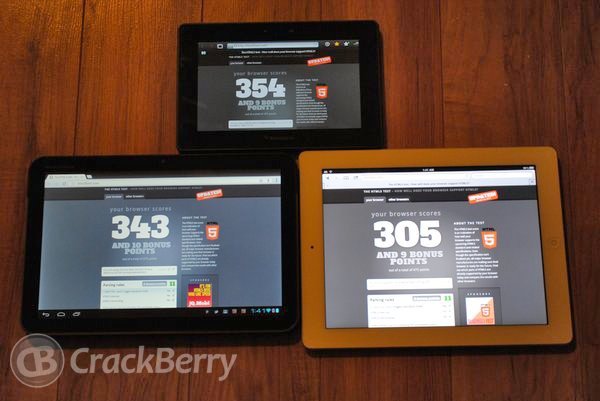 There is an article that has been going around stating that Apple's iOS is three times faster at rendering HTML5 games then that of Google's Android. The information was compiled by spaceport.io, wherein they tested various devices including the iPhone 4S, the iPad 2, the Samsung Galaxy Nexus and finally -- the Samsung Galaxy Tab 10.1.

When tested on those various devices, Apple's iOS came out on top with the scores being based on spaceport.io's benchmark system called PerfMarks. According to the information, the iPhone 4S scored 252 PerfMarks and the iPad 2 scores 327, and that is up from 2009 when the iPhone 3GS scored 53. The Samsung Galaxy Nexus smartphone, by comparison, scored 147 and the Kindle Fire scored only 25. The iPad 2 beat all Android devices, even those with better specs such as the Samsung Galaxy Tab 10.1 which came in with a score of 65.

spaceport.io has the source code for their PerfMarks testing posted up on their Github but they've yet to make the full iOS vs. Android documentation available. They will be releasing that information at the second annual HTML5 Game Developer Conference on May 21 in San Francisco. Anyone feel like putting up a server and testing the PlayBook? The source code does include a spot for the BlackBerry PlayBook in the listing.