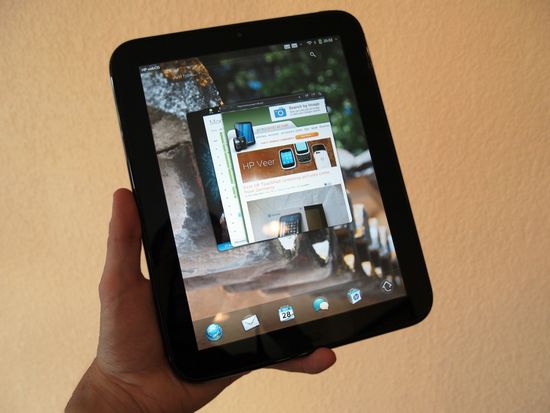 It has been a long year for webOS fans, they've had to watch their beloved Palm brand transition to the hands of HP and for a while there were left wondering what would become of their beautiful OS. They've sat through the launches of the Palm Pre 2 as well as the HP Veer and now, come July 1 they'll be getting their hands on the HP TouchPad.

Over at PreCentral, Derek Kessler has taken the time to write up a Kevin Michaluk sized review of the HP TouchPad and having read through it -- there are quite a few similarities there between the TouchPad and the release of the BlackBerry PlayBook. Both devices, while meeting today's standards for tablet specifications have been met with a lukewarm response. As noted in Derek's review:

The TouchPad’s not a perfect tablet by any stretch of the imagination. It has its faults, but by and large those are correctable missteps, bugs, or omissions on the software front. While no number of software updates can make the TouchPad thinner, lighter, or sprout a rear-facing camera, the hardware is solid and up to the task of whatever you can throw at it. We didn’t even try to break the TouchPad with a Too Many Cards error – we don’t have the patience to figure out how many apps it takes to reach that 1GB RAM ceiling.

While feeling like an OS designed for a tablet, the HP TouchPad at this point still has a few key things missing that are hoped to be corrected through later updates. Sounds a little familiar right? The question of the OS being complete does come up with the consensus being that it could have been a little bit more polished before release.

One key thing HP did try to take care of though was the app selection. In Derek's review he notes that while the HP TouchPad has a system in place to run older third party apps, HP will still have a tough time attracting developers  to their new development platform and apps currently designed to run on the HP TouchPad specifically are limited.

Whether you're just interested in checking out the competition or if you're currently a BlackBerry PlayBook owner looking to see how good the reviews for the HP TouchPad are in comparison to those of the Playbook, I suggest heading on over to PreCentral for the full two-part HP TouchPad review.