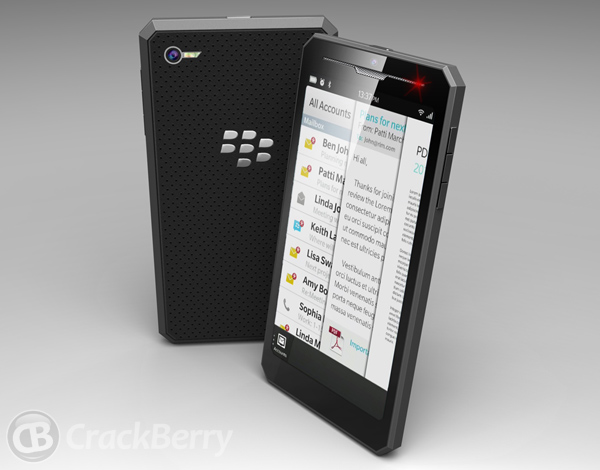 Earlier this year we held our DreamBerry contest, where readers submitted their vision of what the ultimate BlackBerry would look like. We saw a lot of cool concepts, including my favorite that was submitted by the talented John Anastasiadis.

Months later, we're still dreaming about BlackBerry, but now our dreaming is more laser-focused on what the first BlackBerry 10 phone will look like. Based on the BlackBerry 10 Dev Alpha device, we know it will be full touchscreen phone which, like the PlayBook tablet, will have no buttons on the front (gotta love gestures!).

We also know that for BlackBerry, the Bold has been their flagship line up of phone and that with the BeBold campaigns they have been further trying to build strength into both the BlackBerry brand and the Bold name.

Taking the approach that the first BlackBerry 10 phone will be a flagship device and could *possibly* fall into that Bold family, John went to work on the full touchscreen BlackBerry 10 Bold design you see above:

For this design I wanted to marry the Bold 9900 with the Dev Alpha device while keeping the design "agressive yet approachable". The best part of the Bold 9900 is the aluminum outer band that is chamfered. This has a nice look that makes the unit look thin and strong. In this rendition I've anodized the aluminum. The back side has a nice texture that BlackBerry's have had on various models.

I know looking at renders like this is torture when we're still months away from getting our hands on the real deal, but in the meantime it's a fun way to kill the time. So what to do you guys and gals think? I know I am loving it. It almost exudes a military grade toughness, which I love (the same sort of emotional reaction I have to my Bell & Ross BR-O1 watch). We always say BlackBerry is a tool to get sh!t done, and I think a design like this plays well to that. Though I do think this same design in WHITE could look hot too.

Be sure to click on the image above for a larger version, then drool, then sound off in the comments with your reactions!