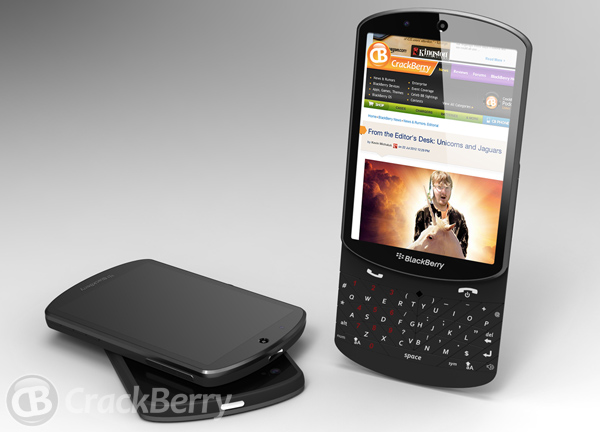 Sexy, right? As we endure the wait for BlackBerry 10 phones to hit the market in 2013, our friend Jon Anastasiadis is helping us pass the time by torturing us with hot looking BlackBerry 10 creations of his own. We've already had a look at his full touch and full qwerty concepts. The next logical step of course is a slider.

As we learned from our recent interview with RIM's CEO and CMO, when BlackBerry 10 is announced in 2013 the company will announce both a full touchscreen and full keyboard version. Will they follow up with a BlackBerry 10 slider? There have been a lot of previous rumors about a BB10 slider, that went by the codename BlackBerry milan, including the most recent rumor that the milan hardware design was ultimately scrapped.

I know a lot of CrackBerry readers out there are hoping the slider form factor remains in the mix with BB10. Back in March a render appeared of another concept device dubbed the BlackBerry Blade that got a lot of attention from the community. The problem with the Blade was that it was more of a BlackBerry 7 design than BlackBerry 10 design, as it featured the traditional menu and back buttons that wil not be there on BB10.

BlackBerry 10 slider with Angular Keyboard: For this BlackBerry 10 slider concept, John implemented an angular keyboard. RIM was recently granted a patent for this angular keyboard design, so John put it to work on the slider. Slick looking. I wish I could try typing it on it right now! John also incorporated a micro trackpad between the T and Y keys on the keyboard. Remember, if you hook up a PlayBook to a mouse you can get a cursor on the screen. This is there for those finite movements. Or, maybe we will see RIM more fully adapt the BB10 OS to be trackpad friendly to help promote one-handed ease of use when on a physical keyboard. Time will tell!

Be sure to click on the photo above to get a larger and bigger look at it. And when the drooling is done, drop a comment with your reactions!