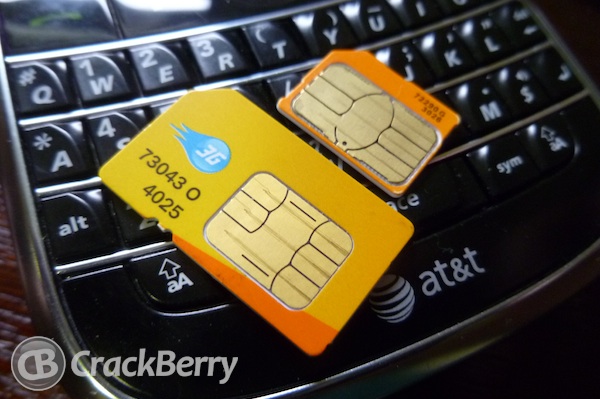 Using a standard SIM card in your GSM (and some CDMA) BlackBerry is pretty easy to grasp at this point. Most come pre-installed if you buy your device from a carrier store, and even if it isn't, getting it in your phone is pretty straight forward. If you're like me however, you might have a micro SIM you want to use in your BlackBerry (I often use both an iPhone 4 / Bold 9900 and swap SIMs between them) it can be a bit more tricky.

Using a micro SIM in your BlackBerry smartphone

Getting started - What you'll need

We have two choices here, the first is kind of a bold move which I wouldn't suggest trying  - cutting down your standard SIM card. To do this, you'll need to have some crazy skills with an exacto knife or buy a SIM cutter.

If you're afraid of cutting up your current SIM card (which you should be!) you can usually get one free from your carrier. Either stop by a store or call them up and they should swap out your current, standard SIM card for a micro SIM.

The next thing you'll need to do is purchase a micro SIM adapter.

Once you have both your micro SIM card and micro SIM adapter, the rest is easy. Now keep in mind things may vary a bit here depending on your device, so take that into consideration.

Putting in your micro SIM

Put your micro SIM into the adapter as seen here. It really only fits one way so it shouldn't be too hard to figure out.

The card will most likely be a bit loose and can fall out easily, so be careful as you slide it into the SIM slot on your device. There is a chance it will get stuck a bit (as it does often on my Bold 9900) so press it down as you slide it in.

That's all there is to it. Now you'll have a micro SIM you can swap between your BlackBerry and other devices, plus you'll be ready for BlackBerry 10!