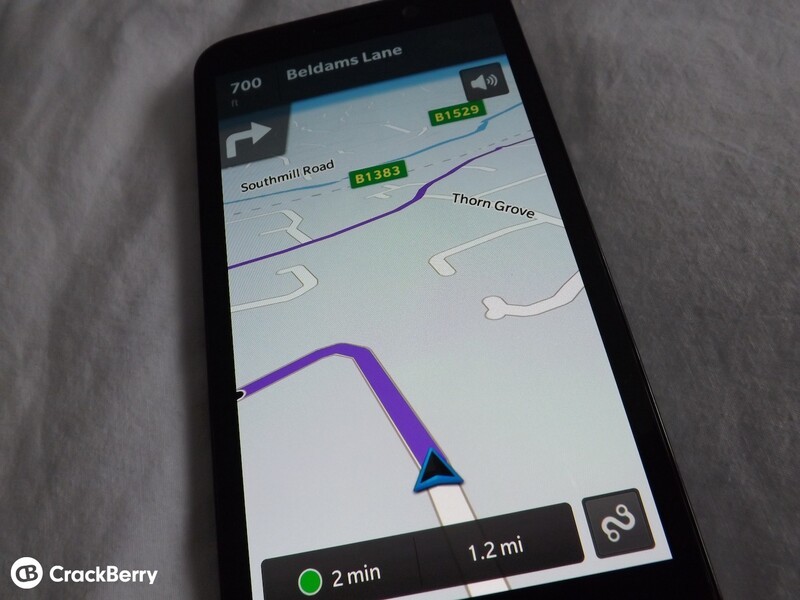 If you are thinking of picking up the BlackBerry Z30 you'll be pleased to know that mapping and navigation are built right into BlackBerry 10. The Maps application may not be as fancy and in depth as the likes of Google Maps or some other third party ones but for finding an address and getting there it does the job just fine and I rarely find myself using any other application for navigation.

Once you open BlackBerry Maps you'll be presented with a map showing your current location with a blue icon. From here you can pinch to zoom and pan around if you need to but the most useful part of the app is the search bar at the very top of the display. Here you can enter an address, including house number, and as well as that result being displayed in a list you will also get road names with similar names - with the nearest to you at the top.

Once an address has been entered it will be displayed on the map and next to it will be an arrow. Press this and the Z30 will calculate the route to your destination. The route will be shown on a 2D map if you want to see which roads you will be taking and then it's just a case of pressing the start icon at the base of the display to begin navigation.

Then the 3D map kicks into action and as you would expect the roads you need to take will be a different color to the rest. At the base of the screen you'll see the estimated time to your destination as well as the distance. There is also a tab to switch you back to the 2D map if you so desire. Up at the top you will be shown the name of the next road you need to take and its distance from you. One extra tab I really like is the one that enables you to mute the voice. On many other navigation applications you need to dive into a separate screen for this and as most of the time I don't want to hear the voice this suits me perfectly.

Back on the initial map you will see a tab at the base of the display for 'My Places'. This contains three sections which are tabbed at the top. These are Recents, Favorites and Contacts. The recent one just lists the previous routes you have taken and any of these can be added to the favorites section if you visit them regularly. The contacts section interacts with the phonebook on the Z30 so it will list any contacts that have an address filed. This certainly makes life a little easier than doing a manual search for an address.

Jumping into the settings will allow you to alter the units of measure - depending where in the word you are as well as a few other minor things. There is a day and night mode and I suggest you just set this to auto. One final feature I wanted to mention is the ability to toggle on and off traffic. It makes sense to leave this on so that when you set off for a journey any delays will appear with red markings on the roads, which you can then avoid.

All in all the navigation options on the BlackBerry Z30 do the job well. If you are considering picking one up not only will you have an amazing communication/social/gaming device but you will also have a free Sat Nav - what's not to love about that?