We all know that NFC is the future in mobile payments; heck your credit card or bank card may already have the technology built into it. 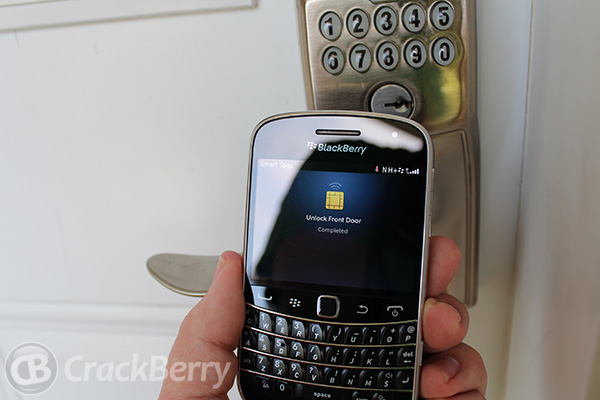 With NFC technology already in real world use, it isn’t too far of a stretch to believe that this tech will be making it’s way onto our next generation BlackBerrys and other mobile devices as well. In the third and final installment of the “CrackBerry goes to Waterloo” series, I’m going to take a look on just how RIM is planning to build a more connected future with BlackBerry and Near Field Communications technology.

To understand how RIM currently feels about  NFC, we need to see how they’ve implemented it into the BlackBerry 7 operating system currently, with your NFC enabled BlackBerry, you can do a few things like transferring photos and videos to another BlackBerry, adding a BBM contact, suggesting apps from App World and more all by just a touch.  If you haven’t tried it out, I suggest you do so. Also, RIM has built NFC into the all-new BlackBerry Stereo Gateway - a Bluetooth connected media hub that allows you to connect to your BlackBerry by just a tap. With the current implementation, it shouldn't be too hard to imagine just where things are headed in the connected future.

During my discussions with Geoff MacGillivray, Manager of Services Security, Payments & NFC at Research In Motion, I asked him where RIM was thinking of taking NFC technology. While Geoff couldn’t comment on all of RIM’s future plans for NFC implementations, he did discuss what could be and hinted at a possible future.

RIM’s NFC vision is almost as if they want your BlackBerry smartphone to be the key to your everyday life. Your BlackBerry with  NFC might be used to unlock your doors, connect to your car’s Bluetooth and control your home alarm system. You will also be able to make payments for everyday items like movie tickets and groceries, even check-in to that new bar down the road with foursquare using  NFC technology.

Since there are so many possibilities for NFC, why stop at payments and a simple foursquare check-in, why can’t our BlackBerry smartphones be used in conjunction with NFC to become our boarding pass for our next trip? The future is there, and RIM is pushing ahead by using both open NFC standards and closed high level secure standards for things like mobile payments and various other scenarios like unlocking a door.

By using open standards RIM is able to build a more connected ecosystem.  The reasoning behind this is because most manufactures will be able to build accessories (yes, a car could be an accessory to your BlackBerry) and have them work across almost all mobile platforms. Since manufactures will be able to enable their devices to work with more phones, we, as consumers, will have more options when it comes to working with a connected future; a true win-win if you ask me.

The future of NFC technology is certainly looking interesting. RIM is at the forefront of NFC by using open technologies, leading to the broadest range of NFC enabled devices.  The added fact that working with companies to ensure that BlackBerry and NFC are in their future plans is promising. I just can’t wait to have an NFC BlackBerry PlayBook and BlackBerry 10 device; a killer combination when it comes to the new mobile computing world upon which we are about to embark.