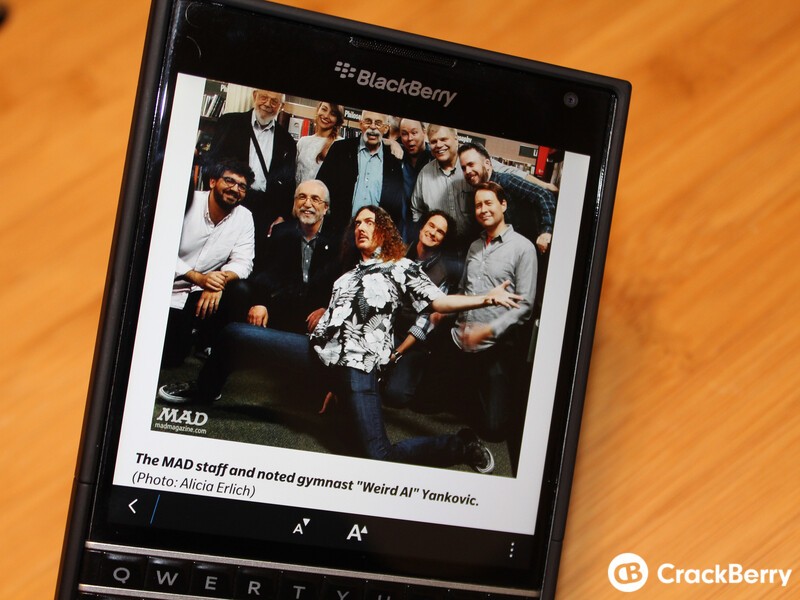 For those who are wondering what Weird Al Yankovic has to do with a BlackBerry Passport let me explain. I had the pleasure of attending MAD's issue signing at the Union Square Barnes and Noble in New York City. Weird Al was the "Guest Editor" for this issue and both he and MAD Editor John Ficarra were there to sign copies of the magazine that hit newsstands on Tuesday.

Not one to miss an epic event such as this I decided, of course, to document each memorable moment on my trusty BlackBerry Passport. As it so happens, I sent one of these images to my friend, a Production Artist at MAD and the person responsible for my invite, and what happens next is unbelievable in every sense of the word. MAD asked if they could use the image and as a result it is now on their blog and Facebook page/photo album with credit.

Below you can find the links to both the blog and Facebook page. My image is the one that depicts Weird Al as a "gymnast" with the MAD staff. I honestly do not know what to say. I am speechless that this happened. First, I have to thank my friend, Lana Limon, for not only including me in the evening's festivities but everything else that followed, and, second, a big heartfelt thanks to MAD for making this happen. Of course, none of this would have been possible without the camera on my BlackBerry Passport as it produced one of the best images taken.

Have you scored some awesome shots on your BlackBerry Passport? If so, stop by the CrackBerry Forums and share them for others to see.