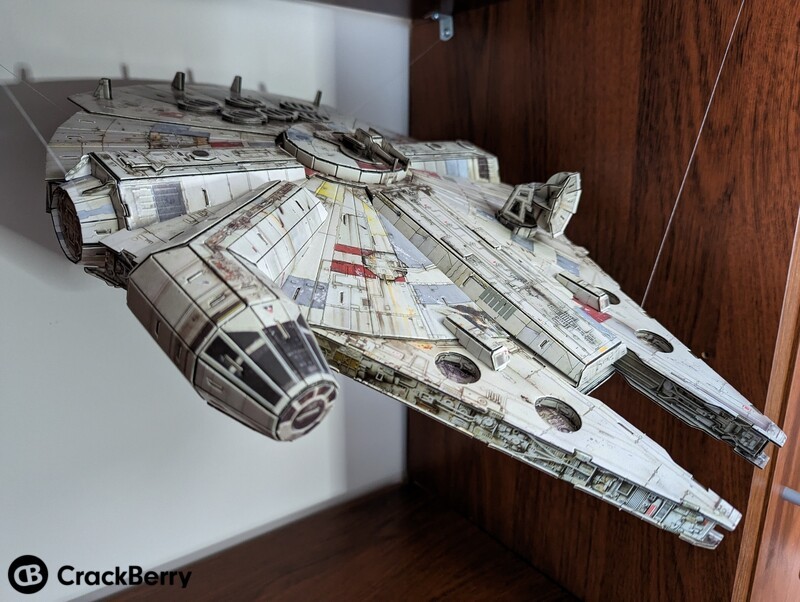 Last year for Christmas, my kids received an interesting gift from a relative: a model kit of the Star Wars Millennium Falcon and X-Wing fighter from 4D Model Kit. Over the following days, we opened the box and discovered a fun new take on realistic 3D model construction with cardstock paper cutouts. With 376 pieces in the box, my nine-year-old son, six-year-old daughter and I spent quality family time during the holidays piecing these models together. And we built two badass spaceships.

It took about eight hours to build both models (spread across multiple days), but when we were done, we were amazed by the results. The X-Wing and Millennium Falcon look so realistic, with great colors and a lot of detail. I've been asked several times by family and friends about them, so let me tell you about my experience.

What is 4D Model Kit?

Unlike LEGO, which has been around since 1934, you're forgiven if you haven't heard about 4D Model Kit. This brand has been around for only 12 years (since 2010), and it claims to be the first creator of these collectible cardstock 3D model kits. Similar to LEGO, 4D Model Kit offers kits with several licensed brands such as Star Wars, Harry Potter, Marvel, Game of Thrones, Lord of the Rings, DC Comics, and Disney. I counted over 50 different models available on the company's website, offering a variety of kits to choose from. Personally, I like the Star Wars models as they are iconic and really stand out.

Assembly of my model spaceships

In the box, you find a stack of cardstock sheets holding the individual pieces and an instruction booklet. Like LEGO, the instruction booklet is a visual guide (no words!) of how to assemble the model, but unlike LEGO, the pieces are numbered so it makes it easy to find the correct piece on the sheet. Once found, the pieces can be punched out of the sheet and fitted, then glued into the model. When building the model with my kids, I had my daughter find and punch out the pieces. The pieces themselves fit together using what's commonly known in woodworking as a "tenon and mortise" joint. This joint, where one end of the piece fits snugly into a slot in another, gives it good strength and rigidity. With a dab of glue at the joints, the model stayed together really well.

Sample Instructions show the numbering of the pieces, where to place them, and where the glue needs to be applied.Source: 4D Model Kit

The pieces themselves are made from cardstock that is around 2mm thick and has designs and detailing on both sides. In some cases, the pieces need to be bent into cylinders, cones, or cubes and there are purposefully made cuts in the pieces to allow these kinds of folds and bends. Most of the time, the pieces fit together easily, thanks to their precision cuts. However, in some cases, the assembly was tricky when dealing with pieces that require a lot of bending and gluing at the same time. My nine-year-old needed help as it was too difficult for him alone. Some of the kits are rated for ages eight and older, but based on my experience I think 10 or older is more appropriate, considering the required dexterity and gluing involved.

The X-Wing and Millennium Falcon look so realistic, with great colors and a ton of detail.

During the assembly of the second model in the kit, we ran out of glue. I'm not sure if I just used too much glue on the joints or if not enough glue was included in the box. After contacting 4D Model Kit customer service, they told me I can just use any Krazy Glue. After doing some research, I ended up buying B-7000 glue from Amazon, which isn't Krazy Glue, but I'm still really happy with my choice. The glue is transparent, dries fairly quickly, and most importantly, it has a nice fine tip perfect for placing glue exactly where you want it. I also ended up using a cell phone stand as my glue "holder" so as to prevent it from leaking during assembly.

The X-Wing fighter looks great in my living room.Source: CrackBerry

A perfect gift for the geek in your life

My kids and I had such a great time last year with the 4D Model Kit that on my recent trip to Costco when I saw another Star Wars kit, namely R2-D2 and BB-8, I bought it immediately. The goal is to, once again, spend quality time with the family building these models and, in the end, have something worth showcasing. This is the start of a new holiday family tradition!

Waiting until the holiday break to build this kit with my family.Source: CrackBerry

If you are looking for a last-minute holiday gift for someone who likes Star Wars, Disney, DC, Marvel, or any of the other brands that 4D Model Kits partnered with, you definitely want to check them out. They require a bit more dexterity than LEGO, but they're just as rewarding (if not more so).

4D Model Kit brings you 4D Star Wars Cardstock models. Each kit is specially designed to deliver oversized and accurate models of your favorite spaceships. Each kit comes with 2.0mm modeling sheets, detailed instructions, and glue to stick all together.