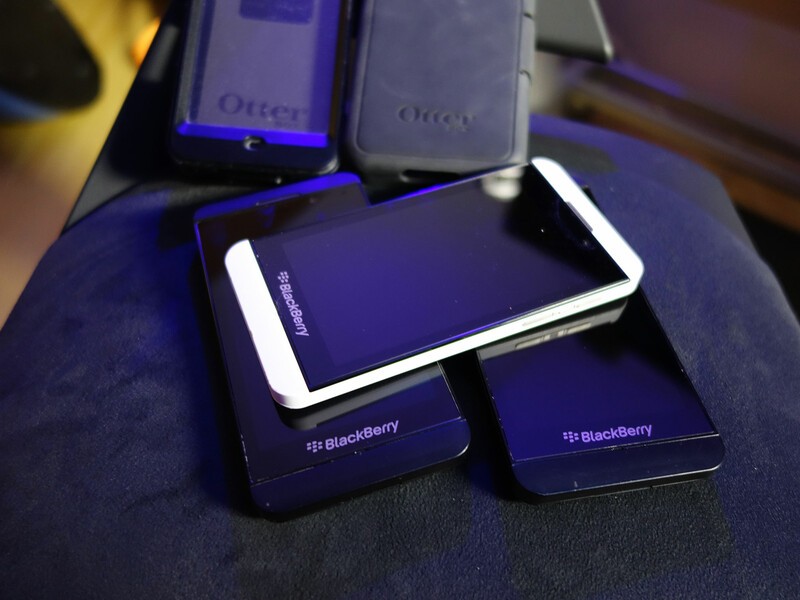 I have now nicknamed my older brother Mark the 'phone wrecker'. He dropped by my place earlier in the week to give me a hand installing a TRX mounting bracket on the ceiling in my condo (in true younger brother fashion, I watched while he did all the work), and along with his tools he brought with him the three broken BlackBerry Z10s pictured above.

Each of his Z10s suffered the same fate — a busted earpiece speaker. In other words, if you're on a phone call and put the Z10 to your ear, all that comes out for sound is some hissing static noise or nothing.

When his first Z10 suffered this fate, I didn't ponder on it too much. Maybe it was just a one off. At that point searching around CrackBerry's BlackBerry help forums, I didn't come across anybody experiencing the same issue. No reason to panic, right?

As a BlackBerry fan and wanting to see the company do well (A.K.A... sell more phones!), he picked up another Z10. He lasted a few more months with it, and then *poof*... same issue.

At this point I was beginning to get a little concerned about a hardware reliability problem, but we both thought maybe environmental use was to blame more than the phone itself.

Mark is the smart one in the family. He's a mechanical engineer, and is the VP of engineering at a company which designs and manufacturers composite parts for industrial uses (automotive, agriculture, energy, etc.). While he's often in his office behind a computer, he's also making frequent trips out onto the floor... where there can be lots of dust and grime floating around.

He almost always uses a case of some sort on his phone. Typically from Seidio or Case-Mate, and occasionally from OtterBox. With his previous BlackBerry Bolds and Torches, he never ran into this earpiece-blowing issue.

For his third Z10, he beefed up his case to an OtterBox Defender. Basically, the most case protection you can get for a Z10. Still not 100% sure what it was that was breaking the earpiece on his Z10 given that his previous BlackBerry models didn't suffer this same fate, I at least thought the Defender case would be the solution here. Which it was, for a few months, until yet again his Z10's earpiece speaker blew out.

Now three busted Z10 speakers into it, I began searching again to try and figure out what the culprit was. I came across this thread in our forums from another Z10 owner who's speakers also got destroyed:

My speakers blew out. First, the earpiece, could still use the speaker. Then the speaker. I'm a sprinkler fitter. My friend who has an iPhone said it happened to him. Metal shavings get in the phone, touch the magnet and it blows.

Talking to my bro on it, we're pretty sure this is the cause of his three broken Z10 speakers (he's not so hands-on in the dust all the time that this was an obvious reason). Perhaps there's something in the design of the Z10 that makes it easier for metal shavings / dust particles to make their way into the earpiece and wreak havoc. I mean, even with OtterBox protection, it was only a function of time.

Now knowing that this is likely the problem and looking for a long-term solution, I'm thinking what Mark actually needs is a waterproof smartphone. I mean, if you can keep water out of the phone, I'd assume that same protection should keep metal particles out of the earpiece, at least more effectively than a non-waterproof device.

The upcoming Galaxy S5 is waterproof straight from Samsung, as is the already-available Galaxy S4 Active which is specifically designed for more rough and tumble use. Sony also has its Xperia Z phones, which are waterproof.

Ultimately, my brother wants to stay a BlackBerry user, but at this point he's considering making a switch to either the S4 Active or the Galaxy S5. In this case it has nothing to do about OS or apps or software, but it comes back down to durability and reliability.

To that end of wanting him to remain a BlackBerry user, you can now put Waterproof BlackBerry onto the list of things I'd like to see BlackBerry to work on for the next hero phone release.

Until then, Mark ordered three replacements earpieces so he's going to do some surgery on his Z10s and get them running again. In the meantime while he's waiting on the parts to arrive, I borrowed him my BlackBerry Z30 to try. Compared to the Z10, he's loving the BIG screen and BIG battery life.

Anybody else out there experienced similar issues with their BlackBerry? And how many of you would like to see your next BlackBerry be waterproof from factory?