The one thing we all crave from our BlackBerries, aside from a smaller price tag, is more battery life. In the spectrum of wireless devices, BlackBerries are actually pretty good in terms of battery life. Still, it’s always nice to have a little bit more, especially when you forget your travel charger on that business trip you’re taking. 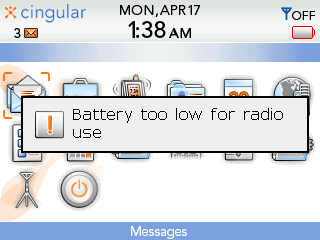 1) Don’t use the backlight. This isn’t always an option, like in the 7100 models, but using the backlight will eat up a fair amount of battery life. Save it for when you really need it.

2) Ease back on wireless stuff. I know it’s cool to surf the web and chat from your Berry. But programs that use the wireless capabilities of the device, like the browser, put additional drain on the battery. Go easy when your battery gets low.

3) Turn off wireless when coverage is poor. Being in a fringe or no coverage area means that your BlackBerry may have to transmit many times before the packets make it through. This will eat up the battery faster than normal.

4) For that matter, turn off wireless completely. Gasp! There, I said it. I know, that’s really no fun at all. But if you’re far from a charger and low on battery, you gotta do what you gotta do.

5) Turn off bluetooth when you aren’t using it.

7) If battery life continues to be a problem, consider buying a spare. For around $30 you buy some peace of mind that you’ll always have power. Because everything on the BlackBerry is written to Flash ROM, your data is safe while you pop out the old battery and replace it. Buy Spare Batteries Here.

## This Article Was Originally Published by AllBlackBerry.com on April 26, 2006
NEVER GONNA GIVE YOU UP NEVER GONNA LET YOU DOWN