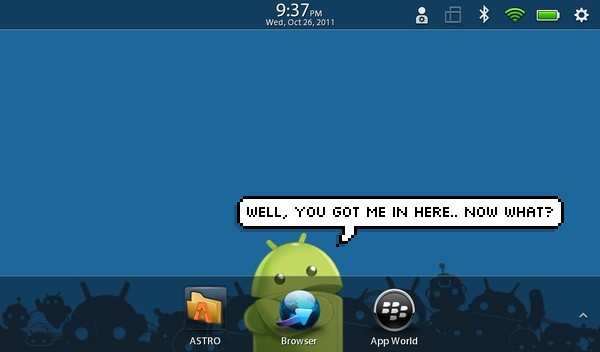 If you're looking to get some big name apps like Kindle, Google Maps or DropBox onto your BlackBerry PlayBook after upgrading to OS 2.0 - have no fear. You now have the ability to sideload (aka load outside of BlackBerry App World) many Android apps with just a few simple steps.

All you'll need a Windows PC and your PlayBook, and by following a few simple steps which we'll go over in detail, you'll be up and running with some great apps in no time at all. You can check out a full list of working Android apps as well as download some BAR files from our thread in the forums, then head to the link below for a full tutorial on how to sideload Android apps on your BlackBerry PlayBook.

How To Sideload Android apps on PlayBook OS v2.0 for use with the Android App Player
Links to over 243 BARs for your BlackBerry PlayBook