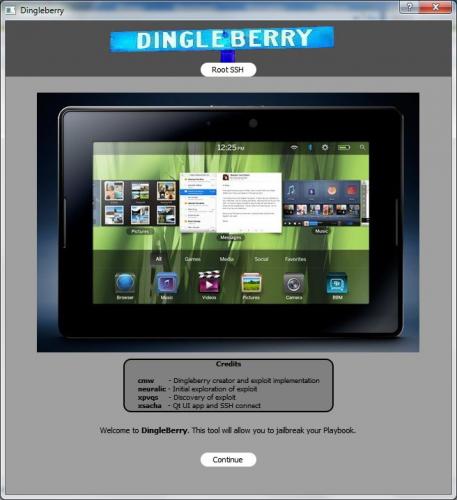 In case you haven't heard, you can now root your BlackBerry PlayBook using the Dingleberry tool. What that means and what you'll be able to do with it is an ongoing question, and at this point all we're sure of is that it will be fun. Rooting a mobile device opens up possibilities beyond the limited view of the manufacturer, and lets creative minds have a go at things RIM would never think of. We've already talked about how the enabler of this exploit was discovered and reported to RIM by one of our very own, but what exactly is it doing?

BlackBerry Desktop Manager is a handy program. Having a local backup of your device can be a lifesaver, and enough of us know that one. (Full disclosure -- I love Android, but I use and abuse both a PlayBook and an Curve 8520 as well. I'm a bit of a mobile whore, and freely admit it). But the problem is that those backups aren't signed by RIM's private signing key, and are hackable. That lets people do cool things like pull bar files out of them, and scary things like exploit the permissions of a config file to inject code into the system image saved on your computer. In this case it's the Samba.conf file, which determines how files and folders are shared across the network. The PlayBook uses Samba for mounting the certificate and media folder for wireless sharing. Dingleberry opens up the backup file, changes the parameters in the Samba.conf file, then logs in remotely to crack the system open. How the exploit runs at boot time and forces the edited file to be loaded we don't know, but it's nicely done. But remote exploits are common enough that this should have never left Waterloo this way. Especially since RIM knew.

Expect a patch very soon, and expect it to be forced on you. On the bright side, unless you have to have your PlayBook fully functional at all times, you may be able to opt-out of any patches and wait for independent developers to create a different type of patch that updates without unrooting. We see it on the Android side all the time, and it's worth a shot. Also, as Chris Wade mentioned on the CrackBerry podcast, you can force a version downgrade to roll back to the version that is exploitable. Like we said, until we see what RIM has in store some of the questions are still unanswered. In the meantime, be sure to have as much fun as you can while it lasts!