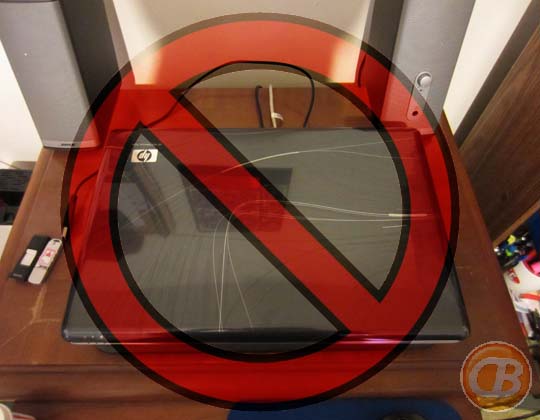 As it was just a little over a year ago the PlayBook was announced, I thought it fitting to tell a tale of why I'm a proud member of the RIMPIRE. In the past few months I've had the opportunity to go completely PC-less. One case wasn't by choice while the other was. Now the million dollar question is can a person survive with limited access to a PC (not counting work) and use nothing but their PlayBook? You'll find out after the break.

Back in May I woke one morning to find my laptop's display dead. Now the truth was I needed to find another way to get my work done before I drove everyone around me crazy. While waiting for a replacement, I decided to rely on my PlayBook and BlackBerry during those couple of weeks hoping they would fill the shoes of my dearly departed desktop. Up until this point I'd only used the PlayBook for games and browsing the internet because of my own personal problems with the keyboard. Now I faced my demons and realized it wasn't so bad afterall.

My immediate challenge: writing posts. I couldn't just stop because my laptop had a boo boo. My solution? Documents to Go. Using the premium version on the PlayBook and the standard one on my device I wrote posts everywhere I could for just about every article posted in May: on the train, on the bus, in the lunchroom at work, and even on my comfy couch while watching TV.

I would start the post on my BlackBerry, snap a screen shot, and then use BlackBerry Bridge or File Browser to transfer or open the files on the PlayBook (or vice versa) to edit and post. After awhile, I realized how heavy my laptop was and having that burden lifted was a relief. Plus the added bonus of not dragging around power cords or burning my lap from the heat helped too.

Now I'm not going to bore you with the day-to-day tasks that followed. Using tablets is all about what you use it for. Since I'm the type of person who checks my emails, edits documents and spreadsheets, accesses chat rooms, plays games, and connects fo friends via social networking sites, the PlayBook fit nicely into my daily routine. Plus I loaded it up with TV Shows, Movies, and Books to take with me while commuting. I once debated over buying a netbook, well as you can tell, not anymore.

I decided to take it with me during my corporate training in Chicago and wouldn't you know it I didn't miss a beat. As a co-worker quietly read her magazine during the flight (laptop was packed away), I watched a movie, played a few different games, and read a few chapters of a book. At the hotel, I used Wi-Fi to connect to my company's outlook website and responded to messages.

What I loved most was bringing it to the training facility. The building had no cell service whatsoever but complimentary Wi-Fi. So while they lectured I tweeted (with Blaq), checked email, and caught up with the latest CrackBerry news all at the same time. Needless to say I was very happy that it lasted the entire trip without requiring a charge.

Now this was no easy feat mind you. I admit there were a couple of times I cheated and fired up the ol' laptop and plugged it into the TV to work. My hands were tied because one of the apps I reviewed that month required a PC and I needed to Photoshop out some personal information on another.

Since the BlackBerry PlayBook came on the scene, the question of whether they can truly replace a laptop has always been out there one way or the other. In my case it did. It's lighter with a longer battery life that also let me get work done, view YouTube videos, check my email, and BBM my friends while my device charged in another room. That's why I've been carrying it around instead of my laptop. I'm not kidding, I sat playing Dead Space in the doctor's office and almost missed my appointment. Now that is how my PlayBook replaced a laptop :).

So folks anyone out there have a similar experience (without the dead laptop of course). Sound off in the comments below.