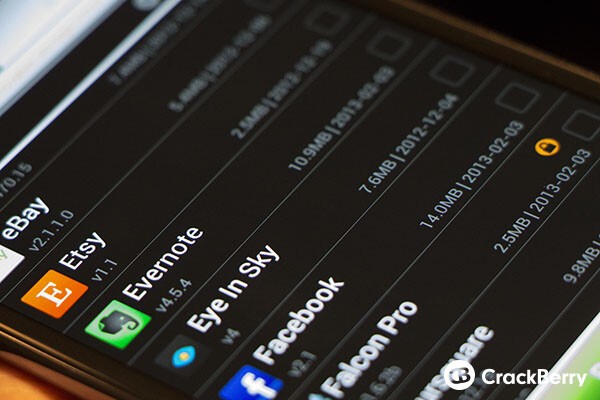 Yes, the image above is of an Android device. But don't get freaked out about it appearing on CrackBerry just yet.

There is a good reason for it, so allow me to explain. Since the release of BlackBerry 10 as well as the BlackBerry Z10 we've been getting a lot of questions on just how folks can back up their free and paid apps on Android and have them run on the new BlackBerry 10 platform using the built in Android app player.

If you find yourself asking that question, you're in luck! You can jump below and read our full walkthrough.

Now before we fully get rolling on this there are a few things to mention. First off, this guide assumes you already have an Android device kicking around in order to install apps onto and subsequently back them up with. It doesn't need to be connected to a network but it should be Wi-Fi enabled so that you can download the apps needed. Plus, having Wi-Fi will help you send the backed-up .apk files to your computer for conversion, though you can always just pull the files off your Android device using your computer as well through mass storage mode.

Secondly, you should only be using your own backed-up Android files for personal use. The question of legality always comes up when we do these sorts of posts and while there isn't really anything illegal about it, I'm certainly not going to pretend like you'll listen to me if I tell you not to share the files with others. You'll do whatever you wish, but consider this a disclaimer of sorts. If you're paying for apps and converting them, don't share them. Cool? Alright then, let's get to this and show you all exactly how it's done.

With your Android device in hand what you're going to need to do first is grab an app that can read your device to find out which apps you have installed onto it. For that, there are a number of options available in the Google Play store though personally I prefer to use one called App Backup & Restore. It's a free app and it works great.

From there, you can start installing any apps you wish to convert from the Google Play store. I say 'any' apps very loosely because there are some apps out there that just simply will not work. In some cases, they're not compatible with the Android 2.3.3 runtime that is currently included with BlackBerry 10. Overall, it's a trial and error thing so you won't know until you try.

In other cases, the Android developer rightfully doesn't want you copying their apps so they've used encryption methods that don't allow you to export the needed .apk file. In the Backup & Restore app image above, these apps are denoted by the orange locked icon beside them. You can still try but your success in exporting them will be limited.

Once you have the apps you want to convert downloaded and installed on your Android device, you'll want to go ahead and fire up the Backup & Restore app you also downloaded. It will read your device and then discover all the apps that are installed. Once discovered, you can selet all of the apps you wish to back-up by checking the check boxes or long pressing on individual ones. Once backed up, they'll go to your archive where you can access them by tapping on the 'Archived' tab at top.

Now that you have the .apk files needed backed up, you then need to get them off of your device. To do that, you just long tap on the app you wish to export and the menu will appear, from there just tap on 'Send' and you'll then be presented with the sharing menu where you can choose how to export the file as seen below.

Personally, I just send them to a Dropbox folder using the Dropbox for Android app but there are several ways to get them off, including the old school method of just grabbing your USB cable and moving them. Email, Bluetooth, Box - it's up to you. As long as you get them moved you can then proceed onto the next step of actually converting them to .bar files.

Now that you have the .apk, you'll need to move on to the next step which is to actually turn it into a .bar file that the BlackBerry PlayBook and BlackBerry 10 will recognize. There are several ways of doing this depending on how advanced you really want to get.

Previously, I wrote up a guide that walks you through the whole process using the BlackBerry tools but that's all rather lenghty and not really needed now given the fact that since that article was posted, an online tool called 'PlayBook .apk to .bar converter' has appeared which does all the heavy lifting for you given that you have the .apk file.

In my experience, the tool works quite well and you can even download apps that others have already converted from there in addition to converting your own chosen files. It's essentially the best option for those who really don't want to mess with command line tools, installing large SDK's, and registering for signing keys through BlackBerry.  Just point the .apk to the site, upload and then download after the conversion is complete.

And that pretty much sums it up, you now know how to backup Android apps, convert them and more importantly -- sideload them so that they can actually be used.. If you're looking for more help on the matter, drop some comments and we'll help as best we can or head on in to the CrackBerry Android sideloading forums where there are always some folks willing to help out.