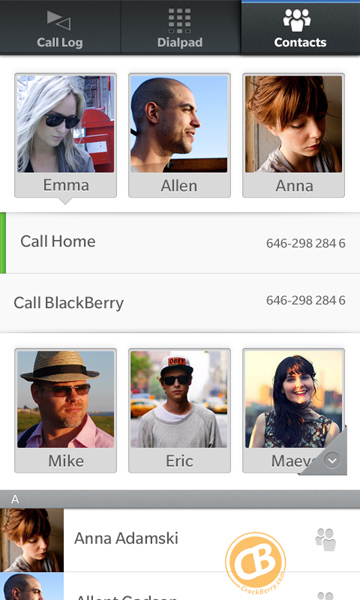 Not a bad week for BlackBerry 10 action. First we posted a mock up of what a full touchscreen BB10 Bold might look like, and then our own James Richardson brought us back a boat load of photos from his BlackBerry 10 hands-on at the BlackBerry Jam event in London.

Now in the screen capture above you're looking at what is reported to be from the Contacts view within the Contacts app on BlackBerry 10. We've had a few glimpses of BlackBerry 10 so far but to my knowledge this is the first time we've sneaked a look at this screen before. We have seen messages and the inbox, and we have even seen what incoming calls look like (in this video) and what the screen looks like once a call is connected (earlier leaks), but this baby is new and looks good!

There's always a chance this isn't final and things will change up, but the design language is pretty consistent with what we have seen elsewhere in BlackBerry 10 so far. Time will tell of course, but in the meantime it's something to look at and drool over as we wait for BlackBerry 10. Enjoy!