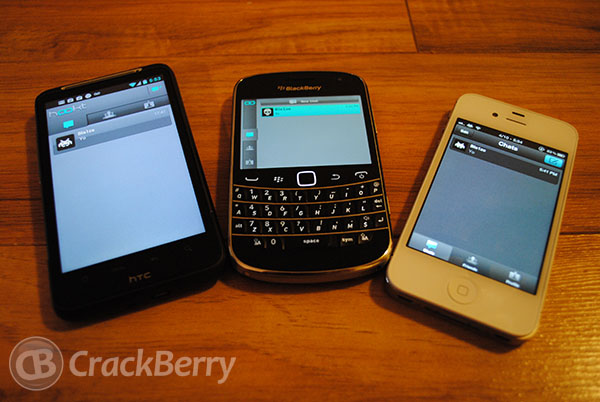 One of the ones that works across multiple platforms is Hookt. It appeared quite some time ago in BlackBerry App World and since then it has gained almost 3,000 reviews, which is quite a feat. BlackBerry users know and love BlackBerry Messenger but Hookt, some would say, takes it to the next level by offering some additional features not found within BlackBerry Messenger such as stickers and the ability to send messages from your computer or even your BlackBerry PlayBook using the Hookt website. The full set of features includes:

It's no secret that I bounce back and forth between devices. Sometimes I use my BlackBerry, sometimes I use an Android device and yes, sometimes I even use my iPhone 4S. Sadly, BlackBerry Messenger isn't available across all those platforms and finding an application that works well on all was rather tiresome until I tried out Hookt.

If you either find yourself switching devices often or just simply want to chat with folks on other platforms, give Hookt a look. The app is beautifully designed and well laid out, plus where it has been out for a while now there are very little hiccups with the actual service itself. Jump on past the break for some more screenshots of the app in action; it really is one of the best BlackBerry apps out there these days both in terms of design and functionality.