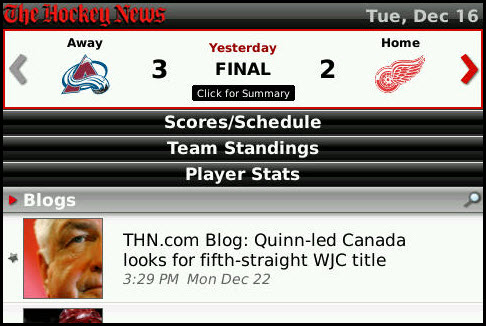 The Hockey News has announced that they'll be beefing up their service and offering in-app and text message alerts. The Hockey News app has been available for BlackBerry for a while now, but users looking to get more from the app may wish to sign up for the new VIP service. For $2/month, you can sign up to receive alerts in the THN application during games, where you will receive reminders as pop-up alerts when running the application. Users can also sign up to receive text message alerts if they prefer. Sadly the BlackBerry version won't include the additional mobile video thats included in the iPhone version (surprise). For more information, check out The Hockey News in BlackBerry App World. Read the full press release after the jump.

TORONTO - The Hockey News, North America's leading hockey publication announced today the launch of the THN VIP mobile program which offers exclusive access to in-app and text messaging hockey alerts and mobile video. Boasting an unprecedented 515,000 downloads of their mobile application since its launch in 2008 and deemed the number one app for hockey fans; this program was developed to deliver value-added features THN mobile users were asking for and a new solution for hockey fans across all mobile phones.

"We have seen tremendous success with THN mobile and are excited to continue to evolve this application. The launch of the VIP program not only takes the THN application to the next level but it also utilizes a brand new platform for THN - mobile messaging which has a much wider reach amongst the general handset population" explains Tom Emrich, Product Manager: Mobile & eReader Platforms, Transcontinental Media.

As an upgrade to the existing THN app, THN VIP is a monthly subscription-based program at $1.99 per month for iPhone or $2 for Blackberry, which grants members access to an exclusive area offering mobile video (iPhone only) and real-time in-app hockey alerts. VIP members are able to customize the type of alerts they wish to receive along with selecting the hockey teams they wish to follow. Members will receive game reminders and scores as pop-up alerts live as the game happens so they never miss a moment of the action no matter where they are or what they are doing.

"The Alerts feature of THN VIP enables an exciting, new way to participate in hockey events. Built off of Polar's cutting edge Real-Time platform, and leveraging Apple's Push Notification Service and RIM's BIS Push technology, the feature provides users with a gripping, immediate, event-by-event look as the games unfold" says Michael Russo, CTO, Polar Mobile - Transcontinental's mobile application partner. In addition to the In-App VIP programs, The Hockey News now supports all message capable handsets by launching its VIP Text Alert program. Offering the same alerts as VIP App members, subscribers can receive game reminders, score changes as well as breaking hockey news for $2/month by texting THN to 22233 (standard message and data charges may apply). The text alert program was developed through Transcontinental's newest mobile partner, MyThum Interactive based out of Toronto. "MyThum is a proud partner of THN," says Michael Carter, President & CEO. "By continuing to enhance their mobile offering, THN enables hockey fans to access the information they want, when they want it. THN has further established itself as the category leader, committed to delivering great content to consumers through their chosen media platform."

The Hockey News mobile application is available in the Apple App store and Blackberry App World or users can text THN to 22233 at anytime to sign-up for the THN VIP Text Alert program on any message capable handset (standard message and data rates may apply).

For further information or to arrange an interview, please contact:
Carlie McGhee at [email protected] or by phone at 416.218.3584.

The Hockey News is published by Transcontinental Media, the fourth-largest print media group in Canada with annual revenues of $607 million in 2009.

Transcontinental Media is a subsidiary of Transcontinental (TSX: TCL.A, TCL.B), with operations in Canada, the United States and Mexico, with revenues of $2.3 billion in 2009.

For more information about the corporation, please visit www.transcontinental.com.
MyThum Interactive is a full service mobile marketing agency that connects brands to consumers through their mobile device. Leveraging our technology, our access to wireless networks and our deep understanding of the mobile consumer, we enable clients to engage and interact with target audiences, then build and manage relationship marketing databases to provide an ongoing, measurable communication platform. Learn more at www.mythum.com