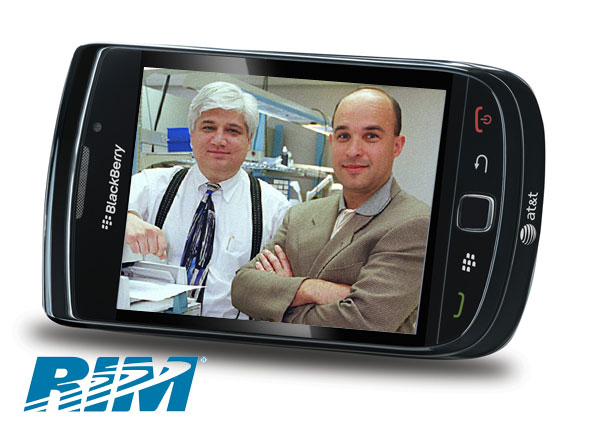 The future of Research In Motion hangs in the balance. It is the early summer of 1997, and Mike Lazaridis and Jim Balsillie stand in a BellSouth conference room. They've spent the last few years trying to convince the world that mobile email is the future. They're almost there. RIM has already produced one device, the [email protected] Pager 900; and is developing a second - sometimes called the Leapfrog.

But BellSouth - the one and only customer for RIM's soon-to-be Leapfrog - isn't happy. They've spent $300 million to buy and build the Mobitex wireless network. But without products to make use of that network, BellSouth finds itself with an unprofitable enterprise. If BellSouth goes through with plans to sell the network, RIM loses its Leapfrog network and the only customer for the device.

RIM Co-CEO's Mike Lazaridis and Jim Balsillie have but one chance to change the minds of the high-level executives in that room. The executives "walked in there thinking they were going to pull the plug," says Jim Hobbs, VP Operations, BellSouth Mobile Data. As Lazaridis begins the presentation that will decide the future of his fledgling company, he comes to a horrid realization. He and Balsillie had been so nervous about the meeting that they had left the models of the Leapfrog in their taxi. It was a make-it or break-it presentation, and the most important parts were lost.

In the Halls of the University

It is no coincidence that Research In Motion sits just off-campus from the University of Waterloo. It is there that the story of the company begins. Mike Lazaridis, long a tinkerer of all things electrical, enrolled in the University in the fall of 1980. Lazaridis learned much, enrolling in electrical engineering and computer science classes. As part of his studies, Lazaridis worked with Control Data Corporation; building some of the most advanced computers of the time.

As Lazaridis neared the end of his fourth year at the University of Waterloo, graduation seemed less and less important. Along with his childhood chum and co-founder of RIM, Doug Fregin, Lazaridis was already hard at work building his first product - a device for displaying information "cards" on a television screen. Called Budgie, it was high-tech for the time.

Ready to truly start his new business, Lazaridis decided to take two-year leave of his studies. Before he could do so, Lazaridis was first required to gain personal permission from the president of the university. Doug Wright listened to the enthusiastic young entrepreneur as he explained his business plan. "I have to do this," replied the president, "I have to try and dissuade you...but speaking personally, just between you and me, go for it."

Now the new company needed a name. Paradigm Research was the first choice to be registered, but that name was taken. Lazaridis tried submitting different variations of words combined with "Research," but each was rejected. As the registration application had to be accompanied by a $160 fee, the company was fast losing money before it even had a name. One evening, as Lazaridis was channel-surfing, he happened upon a bit of serendipity. A news story about football players taking ballet lessons. Footage of players dancing nimbly around the opposition accompanied the words on screen: "Poetry in Motion." Lazaridis submitted the name, and Research In Motion was officially incorporated on March 7, 1984.

The company's first product, the Budgie, was anything but a commercial success. Of the 100 that were manufactured, less than half were sold. But RIM did gain a bit of credibility and knowledge with the project. Soon, the company had a contract to design and build an LED notification system for use on General Motors' assembly line. It would be the royalties from this system that kept RIM afloat in those early times.

While designing that CDS-100 system, RIM acquired its first employee. Lazaridis and Doug Fregin hired Michael Barnstijn, recently graduated from the University of Waterloo, for the princely sum of $400 a month. Though his résumé was impressive, it was his cover letter done in calligraphy that caught the attention of the co-founders. Barnstijn turned out to be a wizard with computer code, finding and fixing bugs that were causing the entire system to crash.

Working Hard for the Money

RIM continued to find what might be considered odd-jobs. IBM wanted a local area network designed and built for them. A dentist wanted a toothbrush that knew how hard you were brushing. The National Film Board of Canada wanted a new system for synchronizing film editing. The system they built won an Academy Award in 1998.

In 1989, Rogers - the Canadian telephone company - had a wireless network with nothing to do. Outside of Sweden, only Rogers carried the new Mobitex network, designed for mobile messaging. After hearing about RIM - during a job interview, no less - Rogers contacted the company to see what RIM could do.

It would be their first big break into the wireless data world. With the knowledge gained from this contract, RIM began to understand wireless and radios like no one else. It is said that at times, RIM knew more about the Mobitex network than the manufacturer did. In later years, RIM convinced Ericsson to let them tweak the network settings, resulting in a huge increase in efficiency.

With all these great technological leaps, Lazaridis realized he had a problem. Though he had a firm grasp on the technology behind the brand, he desperately needed someone to help with the business side. Someone to "run the numbers." Someone to build partnerships. Someone named Jim Balsillie.

1990 marked the first year RIM made $1 million in revenue. It was then that one of RIM's customers wanted to buy more than just parts. Sutherland-Shultz was in negotiations to buy RIM; Jim Balsillie was brought in to be Sutherland-Shultz's closer.  Though RIM passed on the offer, Lazaridis did not pass on Balsillie.  Throughout the tense negotiations, he came to respect Balsillie. Lazaridis needed help with RIM and offered to Balsillie a partnership in the company.  Balsillie said no.

It wasn't long before he changed his mind. Soon Vice President of Finance Jim Balsillie became Co-Chief Executive Officer Jim Balsillie. Few companies decide to use the Co-CEO dynamic. Some have had limited success with it; others have failed horribly. For Research In Motion, it just worked. Balsillie supported Lazaridis' business decisions, and Balsillie learned of technology from Lazaridis. As Balsillie says, "I know I'm just a parrot, but I'm a very good parrot."

It was around this time that Lazaridis decided to give his company a new direction. Though the RIM had success at creating one-off products, Lazaridis saw that the future was data without wires. RIM began to work on building new wireless radios from the ground up.

Do You Have Email?

It may seem strange to think of it, but in 1994; the question wasn't, "What's your email address?" It was "do you have e-mail?" Few individuals had email addresses; some corporations, universities, and salesmen had them, but few individuals. Even at this early time, Lazaridis recognized the potential of email as a communication tool. Even more so, Lazaridis envisioned email in the palm of your hand.

But there were problems. RIM had the knowledge, but the innards of the prototype device were much too big to be of use to anyone. The circuit boards contained only the bare essentials, but they were still entirely too big. Nearly by chance, two Intel employees happened upon this much-too-big circuitry during a tour of RIM's offices. The pair realized that Intel just might be able to help solve this gigantic problem. A year later, a prototype processor was ready.

That year was not wasted at Research In Motion. They spent time studying how people actually type and use a computer. Work was done to increase efficiency and improve battery life. As always, the goal was to create a device that could sit in the palm of the hand and run on a pair of AA batteries.

The [email protected] Pager 900 was born. To say that its users hated it would be a bit harsh, but not entirely untrue. By today's standards the device was enormous. Compared to today's Bold 9780, the 900 was three times the size and three times the weight. Even a Torch 9800 weighs less than half that of the 900. Oh yes, people complained. But they kept right on using the [email protected] Pager; you couldn't pry it from their hands.

Even as the [email protected] Pager 900 - aka the Bullfrog due to its size - launched Lazaridis and RIM were at work on its successor, the Leapfrog. Ready to get the jump on the competition, the new device was planned to be smaller and more useable. A trackwheel was soon added, allowing menus and messages to be traversed with ease. RIM wrote the software code that ran on the device.

And then BellSouth called.

Having realized the Leapfrog models were missing, the two RIM Co-CEO's immediately send someone to find them.  But even without his small production models, Lazaridis carries on.  He sets about to wow the BellSouth executives with the wonder of his invention. He speaks with passion and determination about how the Leapfrog would work. He explains in detail how BellSouth can take its wireless network from being the backbone of a cable truck dispatch system to being the backbone of a nation-wide, two-way email service for corporations. He tells told them of a mass of new customers if the company would but wait for RIM's mobile email.

At last, the models arrive. They are simple wooden ones, the size and shape of the Leapfrog to-be. Pasted on to them are slips of paper designed to mimic what the end user will see as he uses the device. The executives excitedly pass them around, each anxiously awaiting his turn with a wooden model of what will become a revolutionary email appliance.

The meeting was a success. BellSouth not only kept the network, but doubled its size. In August of 1997, BellSouth ordered $70 million (Canadian) worth of Leapfrogs. Research In Motion was on its way to providing wireless email to the masses.


There, out in the horizon of RIM's future, sits a device. It has a trackwheel on the side and a full QWERTY keyboard. In 1998, Balsillie and Lazaridis begin assembling their teams, readying themselves to build this completely new type of device. A device that will come to be called, "BlackBerry."