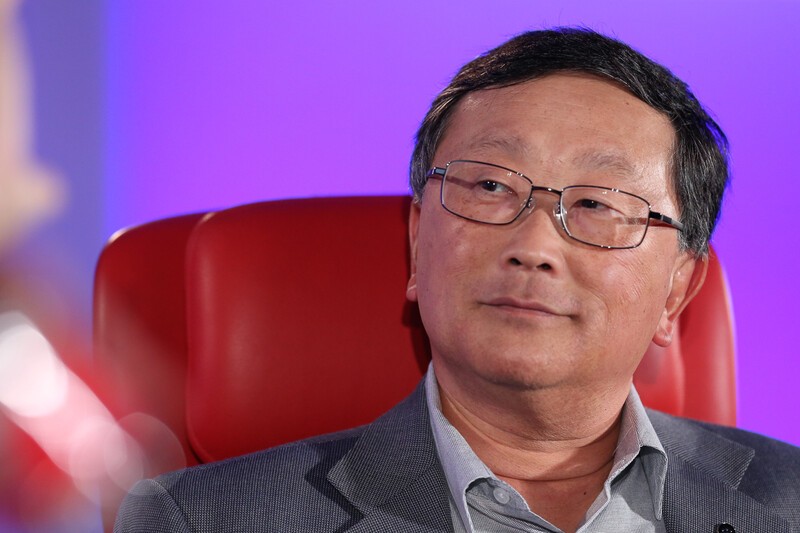 Sitting down with Walt Mossberg and Ina Fried at the Code/Mobile conference in California, BlackBerry CEO John Chen discussed a number of topics including the first Android-powered smartphone from BlackBerry better known as Priv by BlackBerry, the future of BlackBerry 10 and more. Although it was an interesting interview to take in, there wasn't a ton of new details to come out of the event but we've pulled out some highlights that should be of interest.

On Priv and Android

Walt Mossberg: Let's talk about why you're doing this. BlackBerry has been well known for integrating hardware and software; this is a break from that. Why are you doing that?

Two or three things that I need to solve for the company to do well again is I have to go cross platform, I have to solve the lack of applications, and I can't let go of the security aspect. We wanted to bring the BlackBerry know how in security — the whole stack — to Android, recognizing that we need the apps there, and the world is about integrating now. I'm doing what I'm doing to take advantage of what the industry has to offer without giving up the security and privacy features BlackBerry is known for.

Ina Fried: What if you had launched six months ago, and the Priv had stagefright or some other security flaw that was in Android?

We work with Google, but I can't guarantee anything, maybe that's a dumb thing for me to say, but we think we'll be more resilient than anyone else. We inject a PIN in every chip in every phone, even the Android ones, and our security reaches the entire stack. We've created a patching mechanism that will address attacks a lot quicker than others to protect the customer. There are many safeguards and locks in place, but it's not foolproof 100%, nobody can say that.

Walt Mossberg: Are you willing to say you have the most secure Android phone? Is becoming an Android phone maker a path to profitability?

We're probably the same level as Samsung's Knox. The only other commercial phone that can say they have the same or better than us is maybe the BlackPhone.

Android in the enterprise is a very underserved space. With our connection, our accounts, our know-how, it has expanded our servable market. I love BB10, and I win in the very high-end there. But the very high-end is not big. In order to make money in the handset business, I need to expand that pie.

Ina Fried: So the phone's coming out later this year?

Ina Fried: Your costs are going to go up maintaining two platforms. Are you committed to BB10 or will it go away if Android does well?

We have two new releases of BB10 coming out to support government and high-security space.

Ina Fried: Are there going to be new BB10 devices in a year or two from now?

Well, that's going to be dictated by business choices.

Walt Mossberg: You're saying you can still do your security magic on other Android phones if you leave the handset biz?

Ina Fried: With QNX, which became the heart of BB10, you also got a big automotive business. Is that doing well? Are you getting into the next gen of car systems?

The short answer is yes, we're doing very well. We helped Ford and Volkswagen directly, in other capacities our technology was used by other companies to build connected cars. Cars right now have connectibility built in, but they're not really connected. We're focusing on how they can get connected in a secure way.

Chen also addressed a number of questions during the Q&A session, one that stuck out for me personally was 'How do you see the customer, is it consumer or enterprise?'. As I've mentioned a few times now, especially on the BerryFlow podcast, the messaging from BlackBerry isn't always clear in that area and seems to change on a whim, though, Chen did give a decent reply.

We need to prepare ourselves for consumer or enterprise bringing whatever device they want to bring in. Devices are not limited to handsets only. Therefore, we're building a software business that focuses on end-to-end security. As far as the Priv is concerned, the audience goes beyond enterprises. But it will be focused on high-end privacy and productivity.

That of course, led to another question about Priv, and it's pricing at launch. Rumors have placed it on the high-end of the spectrum, and Chen pretty much confirmed that today but made a few notes on the affordability of the device.

High-end price, yeah. We'll make the phone financially affordable to get, whether that's by installments or something else.

All in all, a pretty solid interview even if some of the details are not really new. As expected, Chen did dance around the subject of the future of BlackBerry 10 slightly giving a bit of a non-answer and only dealing with the immediate future being March 2016 when they'll begin rolling out 10.3.3 and later in the year, 10.3.4. Those are the two releases of BlackBerry 10 Chen mentions. Hopefully, Re/Code will have the full video posted up soon. But in the meantime, let us know in the comments what you all thought about the interview.