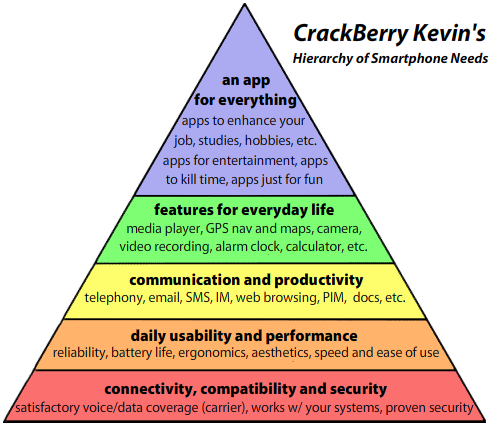 We get a lot of news items sent in on the CrackBerry tips line each week, but yesterday we received one that was more of an essay than a tip. Sent it anonymously, it's the story of a BlackBerry user gone Android gone BlackBerry again. We see threads like this popup in the CrackBerry forums too, but this particular story really made me think about my Hierarchy of Smartphone Needs theory so figured it would make for a good blog post and some entertaining comments (bring on the fanboys!). The image above pretty much explains the theory (especially if you're familiar with Maslow's Hierarchy), but if you want the full details behind it then read this post.

Via our Smartphone Round Robin experiences of the past, one thing i've determined is there is no one best smartphone, but rather a best smartphone for an individual given their needs. Yes, a phone can definitely "win" at certain attributes (fastest browser, best battery life, most apps, best gaming experience, biggest screen, fastest processor, etc.) and you could make an argument that the phone with the most "wins" should be the best phone on the market, but that's not actually the case when it comes to the ownership experience as far I'm concerned. If your phone can't take care of the basics -- like make it through the day on a single charge or get through a phone call without dropping it or manage your communications effectively -- what good is all the other smartphone fluff? I'd rather have a phone that did less better, than a phone that did more but did the critical stuff worse. For me, the BlackBerry is still the best communication and productivity tool out there. In other words, it's really strong at the bottom half of the Hierarchy of Needs. While smartphones are continously improving, it's sort of impossible to be the best at everything, which also explains why the tablet category is getting popular. Assuming you can afford it, I'd argue you'll have the least compromise in your mobile existence by going with a formula along the lines of BlackBerry Smartphone + tablet (iPad, PlayBook, etc.) than by going for one of these current generation big touchscreen phones.

But hey, that's just me and my take on it (and obviously I'm a little bias on loving BlackBerry). So read the story below for some additional food for thought and sound off in the comments!

Why I returned my Android Smartphone? by anonymous

Nope, this isn't a post by a BlackBerry fanatic. It is simply an honest post of why Android is a bit hyped up by the sales rep in the stores, and in my view, not ready for prime time just yet. Why am I writing this post? Well, I want to share my Android experience with you so you do not have to go down same path of frustration and confusion as I did. So, here goes...

Like many of you, when my contract with a large wireless operator ended, a nice sales rep at the wireless store successfully pitched me one of the high-end Android Smartphones, so just like that, I bid goodbye (temporarily) to BlackBerry and opted for the latest and greatest Android Smartphone maker had to offer (the Droid X). At first, I was wowed by the HUGE screen, HD video recording, support for HDMI (though disappointed that no HDMI cable was included!), and of course the newness of the Android OS that I have yet to experience. In short, I went home excited and giddy about playing with a new gadget.
On the drive home (don't drive and text!...yes I was guilty for about 5 mins during the traffic jam), I noticed a microphone key every single time I was prompted to type; unknowingly, I pressed the microphone key and was immediately surprised at the voice-to-text native support on the Android OS and how accurate it was. Sure, I have used software like vLingo on the BlackBerry before, but nothing like this. EVERY text box has voice-to-text support, even in 3rd party applications! At this point, I was pretty happy with my purchase and expected this Android Smartphone to fulfill my everyday communication needs. As soon as I got home, I started to hook up my Droid X with my email accounts (I have about 4 email accounts that I care about). Since Android force a Gmail account upon every Android user, my Gmail account setup was a no brainer.
But then... it got ugly fast.

My 3 other email accounts are all part of Google Apps (meaning my own domains but the emails are hosted by Google), and I assumed the setup for these email accounts were going to be quite simple (because they are Google products). But boy-o, my assumptions were dead wrong.

After fumbling with bunch of advance settings, I still can't connect to get my emails, so I pull out my laptop and looked up the port number that I need to use for each of the account. I then basically had to repeat the same steps couple more times. My first nostalgia for the BlackBerry quickly sets in, as I missed how easy and painless setting up my emails on BlackBerry BIS was (no port number and lookups needed). However, I was committed to my purchase so I shrugged it off as just something that Google does differently. That night, as I went to bed, I setup an alarm for the next morning and turn the phone to airplane mode as there isn't a "Bedtime mode" in the alarm clock, which I always used on my old BlackBerry.

Next day, with a fully charged battery, I was ready to face the day. Within the first hour, I was desperately trying to figure out how to separate out different notification settings for each of the email accounts that I have. Every few minutes I was getting alerts for an email account that I usually like to check regularly but not being notified. So I turn off the email notification for my non-Gmail accounts, but then I was missing emails that I need to respond to right away. Determined not to be discouraged by this little annoyance, I went on my laptop and setup auto-forward from the accounts that I need to respond to immediately to my Gmail account so it can alert me differently. Needless to say, this was not ideal, but it "kinda" got my through the day. Of course, there is the problem that I am now facing with duplicate emails between my Gmail account and my other two accounts. This little annoyance started to become quite a HUGE waste of my time. Despite the great browser experience, huge screen, and other nice to have functions, my new Android Smartphone wasn't doing its job for the thing that mattered to me most.

Already having a little buyer's remorse, it didn't help to see that my Android Smartphone was running low on battery and asked me to charge it (it was only 3PM in the afternoon). To make matter worse, I was out to visit a client. Before the end of the day, the battery died on me and I was pretty much disconnected from my cyber world.

Looking back, switching to this particular Android Smartphone is a bit like switching to a hot new car with all the luxury upgrades but with "donut" wheels - it doesn't run well nor very far. I held on to the Android Smartphone for as long as I could bear but ultimately returned it well before the 30 day mark. On top of ALL that, I got dinged for a re-stocking fee!!

To be clear, I have nothing against anything Android (the green android is actually pretty cute) or have any interest (do not own RIM stock or work for RIM) in seeing BlackBerry "win" the smartphone war. Maybe when my new contract expires, I will try an Android Smartphone again, who knows. What I do know is that, for now, my new BlackBerry is keeping me happy, productive, with the ability to play!

PS - Why anonymous? That is because I work in the Smartphone Industry and having this article in my name might anger some folks in the Android camp.