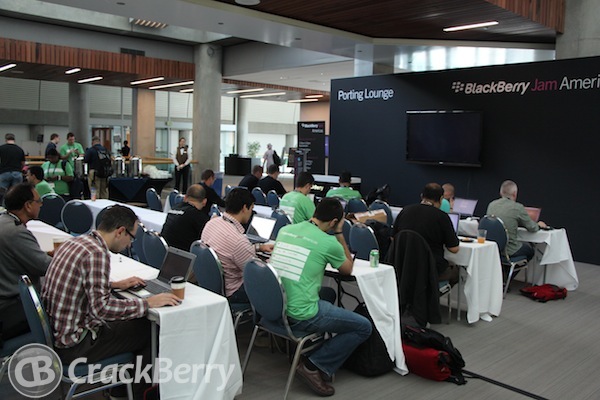 Ever since Alec Saunders took over the developer relations team at RIM, things have been steadily improving. His revamped team has made an incredible difference to the energy and enthusiasm that BlackBerry developers have towards the brand.

As Adam noted earlier, an incredible of example of this is last week's Port-a-Thons. In just over 36 hours, developers around the world submitted over 15,000 apps that are brand new to BlackBerry 10. This goes a long way to making sure that RIM actually has a record number of apps in its catalogue for the launch of a new mobile platform.

These Port-a-Thon events are unconventional in the industry. Why? Apple and Google don't really need to hold them because they've both got most of the apps people actually want. But RIM has put a ton of energy into making sure Android, HTML5 and Adobe Air apps can run on the QNX platform. They've also teamed up with companies like Marmalade to ensure BB10 is supported by their gaming SDK. So unlike the BlackBerry of the past, today's developer ecosystem is friendly to porting.

RIM held two concurrent Port-a-Thons. And both events were virtual, meaning that RIM experts stayed logged-in to the event in order to contribute expertise during the 36-hour marathon (and it actually ran longer than 36 hours in the end).

One of the Port-a-Thons focused on Android ports only. The other event was open to all developers porting from anything else. This includes Marmalade, Sencha, PhoneGap, Qt, BlackBerryOS, AIR, etc.

The motivation for RIM is obvious. They want to populate App World prior to the launch of BlackBerry 10. But what about developers? Well, RIM put up $100 in cash per approved app, allowing up to 20 such apps to be submitted during the Port-A-Thon.  So a developer with a series of apps and ability to execute could earn $2,000 very quickly. Nice incentive. Up to 200 developers would also be given free Dev Alpha prizes, which are then upgradeable to special edition BlackBerry 10 phones after the launch.

In my opinion, it's really important to recognize the impressive results that BlackBerry's developer relations team generated here. 15 THOUSAND apps submitted in under two days! I think that speaks volumes about the quality of the tools that RIM has released. Anybody familiar with RIM's old tools for BBOS (and old submission policies) knows what a huge change this has been.

Sure, many of the apps are likely to be quite simple, or even low quality. But that is par for the course. Aside from the big name apps in the iOS App Store or Google Play, a big proportion of these apps are also low quality.  Even if only 1 out of 15 newly submitted BlackBerry 10 apps is of high quality (however you define that), it means 1,000 high quality new apps for the storefront upon launch.

Any way you slice it, I think this is an impressive result, and shows that RIM is fighting like hell to crawl out of the mess it got itself in over the last few years. Today is a day to celebrate this impressive result.