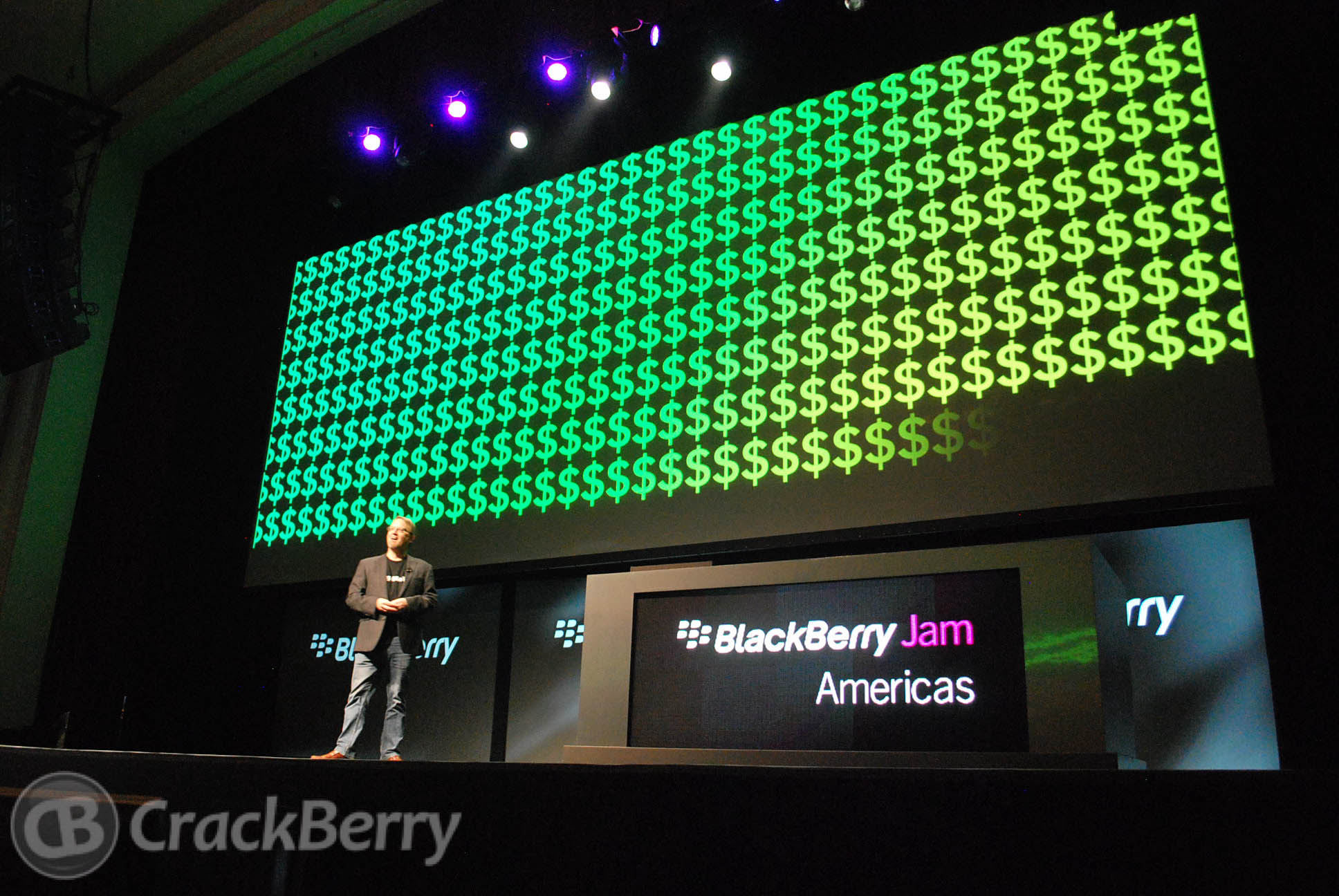 Once every 13 weeks, RIM drops their latest set of financial results. Tonight, the results were slightly better than expected. Supporting this, the stock soared by about 20% in after-hours trading.

I always like to analyze the numbers, and I like to look at them in comparison to expectations. But as usual, I'm reminding you that anyone who looks only at the quarterly numbers and compares them to Wall Street estimates is missing the big picture. These numbers don't tell us anything about RIM's future, but they do highlight certain opportunities and risks.

Revenue was actually $2.9 billion, up by 2% to compared to last quarter. Up is better than down, but 2% isn't a big move. To me it just shows that sales are stable while RIM goes through an enormous transition towards the new BlackBerry 10 platform. Overall, this is good news (so far) because it helps RIM maintain its cash balance which it needs badly.

As we heard from Thorsten on Tuesday in San Jose, the customer base is now 80 million strong, with 60 million users on BBM. This is another good sign because it means RIM's user base is still growing by more than 10% annually. Again, this is super important for the company - a shrinking customer base would increase the risk of a BlackBerry 10 flop. A growing customer base is very encouraging.

In my editorial from earlier today, I talked about the importance of cash to RIM's Q2 results. Recall that after Q1, RIM had a cash balance of $2.2 billion, having generated almost $300 million in cash flow from operations (excluding working capital changes) for the period.

Last quarter they said they'd maintain an approximately flat cash balance in Q2. I was worried it might drop. It did not. They actually ended the quarter with more cash - specifically $2.3 billion. How did they achieve this? It looks to me like another reduction in working capital (reducing inventory and accounts receivable). Obviously this isn't a sustainable source of cash, but I'll take what I can get.

RIM says its cash balance will remain stable next quarter, with some movement around the exact timing of restructuring charges. This can only mean they aren't expecting a revenue collapse, otherwise I don't see how it would be possible. I admit I'm surprised as to how stable their sales seem to be given the age and global competitiveness of BlackBerry 7.

But it's not all roses. To keep its sales up, RIM has been dropping prices. Ehud Gelblum, the analyst from Morgan Stanley, asked a great question about profitability on handsets. RIM management didn't answer him directly but it was very obvious to me they were admitting they lose money on device sales. Their rationale? It's necessary to protect their subscriber base and get people onto BlackBerry 7 devices as much as possible. I happen to agree with RIM completely on this. They need a user base to carry forward. They can't risk losing subscribers. It's worth eating some of the cost to make this happen.

But it still leaves RIM in a position of uncertainty. They don't make money on devices. They need to change this in order to have a long-term sustainable business model. And to make matters (potentially) worse, they generate over $1 billion in revenue per quarter on service fees. These service fees are under pressure. We have no idea how much pressure they're under. In fact, that $1 billion number has been very stable. But RIM acknowledges the pressure. What if this cracks? What it if really starts to decline? What if that happens while RIM still isn't able to make money on hardware? Should that happen this company will hemorrhage cash. At that point, it may not matter how good BlackBerry 10 is.

The good news is the market is clearly still willing to pay for high end devices. The iPhone 5 and the Galaxy S3 are good examples. If RIM can join Apple and Samsung at the high end of the market, it should earn a reasonable profit on hardware. And if it can deliver a superb messaging experience (as it always has) carriers will continue to pay for the use of RIM infrastructure. I just didn't want to paint a rosy picture without also presenting the risks.

Bottom line: RIM delivered numbers that surprised Wall Street to the upside. They've got some runway left. They're showing off a strong set of developer tools an user interface features on BlackBerry 10. The wait isn't going to be much longer now. The company is very different from it was one year ago. They're not out of the woods. Not by a long shot. But they are far from dead. They've still got a very real shot at success in the emerging mobile computing market.