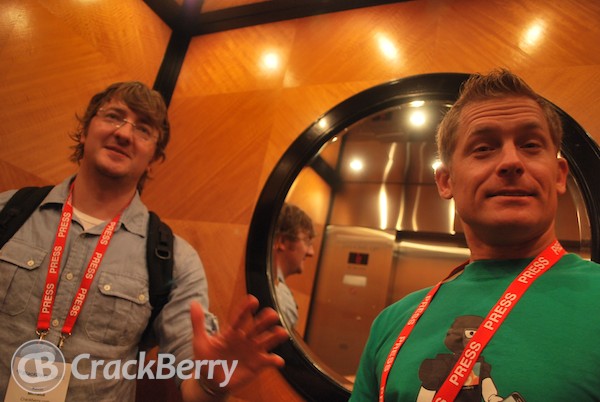 CrackBerry Kevin & Chris Umiastowski at BlackBerry World 2012 - be sure to say hi!

Tomorrow morning, RIM CEO Thorsten Heins will take the stage at the opening keynote session for BlackBerry World 2012. There are a lot of hopes and expectations on RIM from beaten-down investors these days. So I thought I'd write up a quick set of my thoughts heading into the event.

Obviously everyone will be talking about the BlackBerry 10 developer alpha devices that will be given out to developers tomorrow at the sister BlackBerry 10 Jam event. We'll do our best to get a good look at these. But in the mean time, while we wait, let's remember that these are alpha devices. And they're for developers. There's a good chance they won't be very exciting to look at. Instead, what I care about is what developers can do with them.

So, on that note, I think we need to see RIM actually release the Cascades user interface framework to developers. They need to show off some user interface power and allow devs to build great looking apps, and sideload them to the device. I don't think it's too much to ask for this to happen after a solid year of the public being teased by Cascades. It looks amazing. Now get it into developers' hands. Looking at the sessions planned for developers at BlackBerry Jam, it's pretty clear this is RIM's intent. We just need to see a follow through.

We also need to remember that BlackBerry 10 doesn't ship for several more months. There is, in my humble opinion, a zero probability of RIM announcing any kind of official BlackBerry 10 hardware tomorow. That's fine. We don't need to see official hardware, but we do need to get a glimpse of what's coming in terms of the user interface.

RIM needs to show us that they're still a creative company who understands why people fell in love with BlackBerry over the last decade. But they need to do it in a way that is modern, fresh, and responsive.

If Thorsten can get up on stage and give us a good surprise -- a BlackBerry 10 teaser or preview or demo that excites us -- I think it would go along way towards convincing the stock market that RIM has potential...

... But not without strong developer support. So I'd like to see RIM have something to show the world that proves big name developers are willing to build on the BlackBerry 10 platform. And, no, I don't want to see the apps come in the form of Adobe AIR or Android. I want to see developers backing RIM by using native dev tools and Cascades.

RIM stock is up a buck and a half (to about $14.50) over the last week, but the valuation still suggests people think they're going out of business. I don't think that's the case. But what I think doesn't matter. RIM needs to convince the market. A convincing sneak peak at BlackBerry 10, a release of Cascades, and some momentum in developer land would go a long way to make their case on Wall Street.