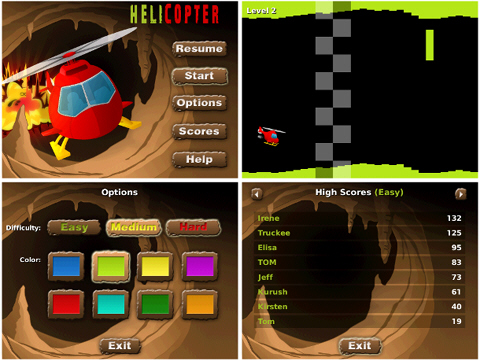 iCopter is one of those addicting little apps that a lot of iPhone users have installed on their device, and thanks to MightyMad it has now come to the BlackBerry Storm in a prettier and more feature-packed form called Helicopter.

The goal of game is to guide the helicopter through the cave and avoid the obstacles. Touching your finger to the Storm's display makes the helicopter gain altitude, while removing it makes it drop. I'd argue the game play is a little trickier to get the feel for than its iPhone equivalent, but within just a few minutes I was able to bust a score of over 3,000 in distance mode (so not too bad!).

In addition to Distance mode, where you see how far you can fly before crashing, Helicopter also offers Level mode, so you can play shorter levels that get progressively increase in difficulty (a nice touch). There are three levels of difficulty and sounds and several color options to keep things fun.

Helicopter sells for $2.95 (no free trial available) and is available in the CrackBerry App Store. Best part yet, the developer is active in the CrackBerry forums talking to members which will ensure version 2 is even better. This is really a well-built, nice looking little game. I hope we see more simple and fun apps like this from MightyMad in the near future (just don't forget about the non-Storm owners)!