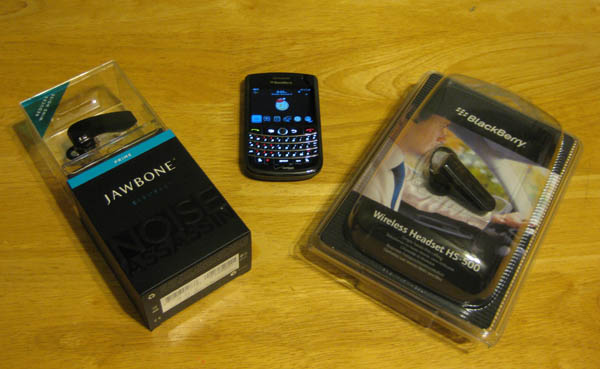 Local laws changed? Time to buckle down and buy yourself a Bluetooth headset to avoid a silly traffic ticket for talking on your BlackBerry while driving your car? The hunt for a headset can be a difficult task since there are so many colors, styles, brands and price points that are currently available. Let's take some time to take a look at two great headsets that are highly rated.

A while back we reviewed the Jawbone Prime, and now we are going to take it and see how it holds up against the BlackBerry HS-500 headset. Now you may think to yourself at this point, there is no comparison, the Jawbone will blow the BlackBerry headset out of the water, but before making any assumptions, let's review the facts and compare.

Let's take a look at the packaging and its contents as a starting point. You will notice a few stand out differences between the two right off the bat, but remember, don't always judge a book by its cover. The Jawbone Prime is presented in a rectangular plastic container which showcases just the headset and hides the rest of the accessories behind the advertisements, while the BlackBerry HS-500 uses the more standardized packaging like many other headsets. Now what's inside these packages you may ask, so now let's get into that.

I would say point one goes to the Jawbone Prime for the packaging, but users are after call quality, not packaging of these units, so now on to look at the functionality of these two great devices.

Now that we got each unit out of its packaging, it's time to charge them up and check them out. One of the things that immediately caught my attention about each of these units was the chargers that came in the packaging. The BlackBerry HS-500 only comes with a car charger, which is not always convenient for everyone, unless always on the go. While the unit only comes with a car charger, the positive side of this is that it does take the same charger as any of the newer BlackBerry models, the Micro-USB. The Jawbone Prime on the other hand has a proprietary charger that it uses, and only comes with a wall charger. This is good for most, but for some that are on the go, or use it heavily, they will have to shell out another $30 to purchase the car charger. Both devices offer a LED indicator that will blink during the charge to notify you it is charging, and then the light becomes solid once the unit has fully charged.

After charging the units, it was time to make some calls after pairing them to my BlackBerry. Pairing both of these headsets was a breeze, the device recognized them with no problem, and I was ready to go in about 30 seconds. In pairing mode, both units blink alternating colors to let your know it's in a discoverable mode, and can be paired to your device. Once paired, the unit will just blink one color to indicate that the unit is powered on. Personally, I was incredibly impressed that the BlackBerry HS-500 uses the same LED colors as your BlackBerry Smartphone, and the LED is actually placed conveniently at the bottom of the unit, so it is not visibly blinking off the side of your face all day. One of the biggest differences I noticed with these two units is that the BlackBerry HS-500 actually has a power switch on it, while the Jawbone has no buttons.

Now the headsets have been paired with the device, it's time to put them to the test and see what kind of results come about. Let's start with the ease of use. Most people would think it's just a headset; you answer your calls by pressing the button, and end it by pressing it again, but these headsets actually offer more features then shown. I was extremely surprised at how many features the very basic looking BlackBerry Hs-500 headset had to offer. Aside from the standard one press to answer the call, while in a call if you press it two times it will mute the call, or if you have another incoming call it will switch to the other call. The device offers many other features based on the combination of button presses for different durations of time. The Jawbone Prime on the other hand has no power switch; you would just press and hold the answer/end button until an audible alert is heard indicating it has been powered off. Along with the answer/end hidden button, there is also the Noise Assassin button, which doubles up as the volume switch, the biggest downfall is that it is only a singular button, so no easy way to go up and down in volume from the headset. Enough about the background of these units, let's move on to call quality and check how that battery holds up on each for you heavy users.

Many brands use talk time as a draw to their unit, hoping consumers will purchase their equipment over the competition, but I know I have always been a little skeptical of how realistic the numbers are. After giving each unit a full charge over night, it was time to see how they held up during both talk time and stand by time.

The results I noticed from testing were very similar to these, of course depending upon usage habits, user results will vary. Personally, when the headset will not be used for a period of time, I turn it off instead of using the standby time of the battery.

A very important feature of any Bluetooth headset will be the comfort of the piece while in use. The last thing you would want would be a headset that is heavy, bulky or just no way to make it comfortable. Both the Jawbone Prime and BlackBerry HS-500 offer owners a few different size earpiece fittings so that owners are able to decide which size fits their ear best and offers maximum comfort. While the Jawbone Prime is actually lighter, .35oz compared to the .53oz of the BlackBerry HS-500, I found the BlackBerry HS-500 to be more comfortable for a long period of use. The Jawbone Prime, and the technology behind it, requires the headset to be resting against your cheek, so at times constant adjustment is needed to ensure it is correctly placed, so it can sense the vibrations from your jawbone. On the other hand, the BlackBerry HS-500 fits very comfortably in the ear, and the ear loop is adjustable in height, which allows you to place it in a position that fits you comfortably. Neither of the two headsets were in anyway uncomfortable, but personally if I had to pick one for daily use based on comfort I would lean towards the BlackBerry HS-500.

So the headset could be amazingly comfortable, but if the call quality is no good, then what's the point? Most of the time that a Bluetooth is useful to me is in my car, so it is very important for it to have great background noise reduction, so the person that I am speaking to doesn't hear the wind and highway noises. This is where the devices were put to the true test, and the results were rather surprising to me. Honestly, I had thought based on the technology used in the Jawbone Prime that it would blow the BlackBerry HS-500 out of the water in call quality but I was pleasantly surprised to say the least. Most of my driving to and from work is highway, with lots of traffic, trucks and wind, so it was perfect to put these things to the test.

Experience with the Jawbone Prime:

Experience with the BlackBerry HS-500

So after so quality time with both headsets, and going back and forth between them for days, I came to the conclusion that my personal preference was the BlackBerry HS-500. Yes, this may sound crazy because everyone knows the Jawbone name and their quality, but from my experience the BlackBerry HS-500 was just as reliable and I noticed no sound quality difference in any location or at any time like I did with the Jawbone Prime. So what are you waiting for? Head over to our store and pick on up now.