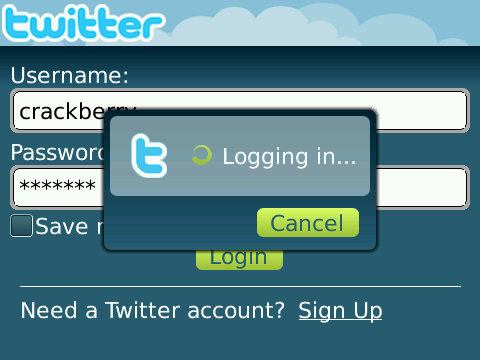 *UPDATE* - Twitter recently made changes in their API that caused a bug for some Twitter apps. As noted by @BlackBerry "A bug is affecting some Twitter clients, including Twitter for BlackBerry. We're working to fix ASAP. Thanks for your patience"

*UPDATE 2* - All should be well now. If you still can't login, try a battery pull and you should be ok.

If you're having trouble logging in to Twitter for BlackBerry you're not alone. I noticed the error last night when trying to login from my Bold 9700. The app hung on the login screen, so I did a battery pull and still nothing. I tried on another device and had the same issue. I escalated it to my tech support (Bla1ze) who was having the issue as well, and as it turns out, so was everyone else. If you're logged into the app already, you should be fine (don't log out or you'll be in the same boat) but those of us trying to get in are having no luck at all. No word of what exactly is causing the issue or when/if it will be fixed, but we'll keep you posted as we find out more details. Are you having issues with Twitter for BlackBerry? Leave a comment and let us know.