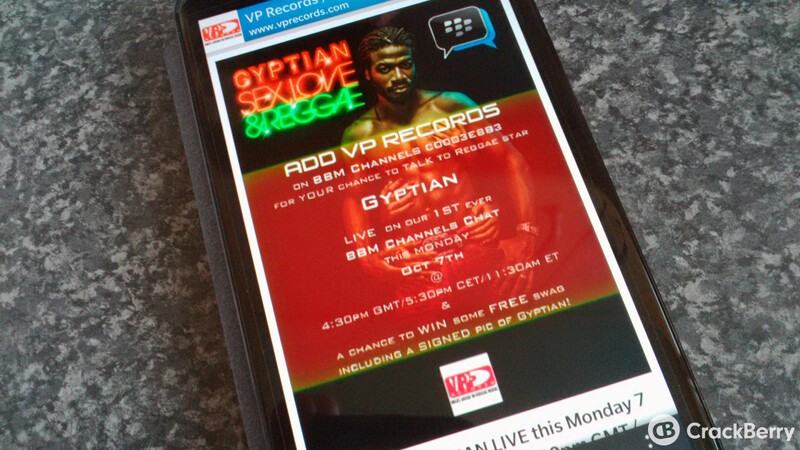 As you know, BBM Channels is still in beta but there are already plenty of users. There are lots of communities, brands and businesses making use of it and it really does have huge potential. I am a massive user of BBM Channels are as more and more interesting channels pop up, my subscribed channel numbers is slowly racking up.

A favorite feature of many users, be it the channel owner or the subscribers to the channel, is the Chat feature. This has proven to be quite useful, even more so when a channel owner can set the hours of availability. This Chat feature can be utilized in many ways and one channel owner has found an awesome way of making use of it. VP Records has teamed up with BlackBerry and will be opening their chat this coming Monday 7th October for subscribers to be able to chat with Reggae artist, Gyptian. There is also the opportunity to win some goodies too.

Gyptian is already a BlackBerry fan and has been rocking a BlackBerry Z10 and has recently got a Q10 in preparation for the channel chat.

This is certainly a great way to utilize BBM Channels, it would be great to see even bigger artists jump on the BBM Channels band wagon once it comes out of beta.

If you haven't tried BBM Channels yet, you can join the beta program via BlackBerry Beta Zone.