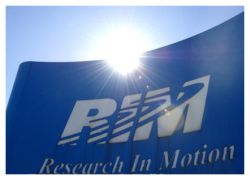 We all love our BlackBerrys for sure, but the maker of the little device needs a little more love after the company took a beating on stock markets amid some major turmoil on world markets.

Research in Motion trades on the Toronto Stock Market (TSX) and on Tuesday and Wednesday that market took everyone on a wild ride . RIM, by virtue of its dominance in the smartphone market, has become a bellwether stock and on Tuesday its shares dropped 11 percent on fears of a US recession. With other key tech stocks like Apple and Motorola taking a dive there are fears a global recession will slow up the tech, computer and smartphone market. Of course, there is no evidence for that but who needs empirical evidence to get in the way of speculation when it comes to market journalists.

The good news is that RIM remains a well-run and strong company. Despite the big push from Apple and its iPhone, RIM has maintained a strong market share and commands 39 percent of the world smartphone market. Fears are being voiced that an economic downturn will impact the consumer market for electronic devices although, again, that is speculation.

The reality is that RIM’s ups and downs are more a reflection of a general jitteriness in the markets as a whole. It will be interesting to see how the company positions itself if indeed the economy does go into recession. The company is aggressive and is diving into Asian markets – areas that may not suffer as much as the US.

It’s worth noting that RIM’s stock was trading at just over $50 a year ago, was up to $126 in October and closed at $88 on Wednesday. So a rough ride and it isn’t over yet.