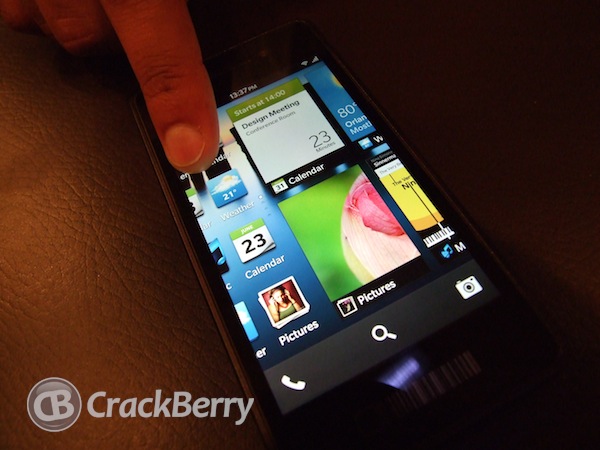 I had the pleasure of attending BlackBerry 10 Jam in London earlier today. The keynote sessions were not too disimilar to what we saw at BlackBerry World in Orlando, however that wasn't the main reason I was there. I was on a mission to find BlackBerry 10 running on the dev alpha device and luckily for me this had been arranged in advance.

So thanks to Vivek Bardwaj, of Research In Motion, I had a one to one session with his device. I wasn't expecting to see anything that had not already been shown off, however seeing a new OS on a big screen and getting hands on are two totally different things. To say I was excited would be an understatement.

Fortunately my high expectations of what I was allowed to play with on the device were lived up to. BlackBerry 10 is awesome!

The seamless integration of the apps all running live, coupled with the screen gestures to allow for seeing other features/apps is glorious. It's all about the flow. And that wasn't even on final hardware.

Flowing between inbox, message and .pdf. Gotta love it!

As you can see from the pictures in this post, the new operating system looks beautiful. I was a little unsure in advance if I would like the touch screen keyboard but after a little practice it all flows very naturally. The 'flicking' of the predicted words upwards works well as do the other keyboard gestures such as swiping left across the keyboard to delete a word, and swiping downwards to switch to the further screens that contain numbers and symbols.

Flicking up predicted words on the BlackBerry 10 keyboard

I'm very much a hardware QWERTY keyboard guy but I can see myself using this device for sure, as soon as possible.

Prior to today I was under the impression that RIM *could* reclaim some market share lost to Android and iOS with BlackBerry 10. Now I am 100% sure that will happen. The developers present today were also super excited but CrackBerry's DJ Reyes will cover that in another post later.

I hope you find the picture gallery encouraging. I know each time a re-look at the photos I get a warm feeling somewhere inside.

I need Q4 to arrive quickly! I'm not sure how I can handle the waiting now I have spent some time with just a few features on the device. And according to Vivek there is plenty of amazing stuff yet to be announced.

CrackBerry and BlackBerry 10.... We Want it!

BlackBerry 10 Icon Tray (looking a little redundant with some icons?!)

BlackBerry 10 notifications and the quick swipe into messages

The BlackBerry 10 Unified Inbox - emails, calls, bbms, all right there

Previewing notifications from within the Calendar

Gesturing between music and notifications

Checking out a picture on BlackBerry 10

And flowing out of pictures

BlackBerry 10 really is all about the flow experience. I can't wait!