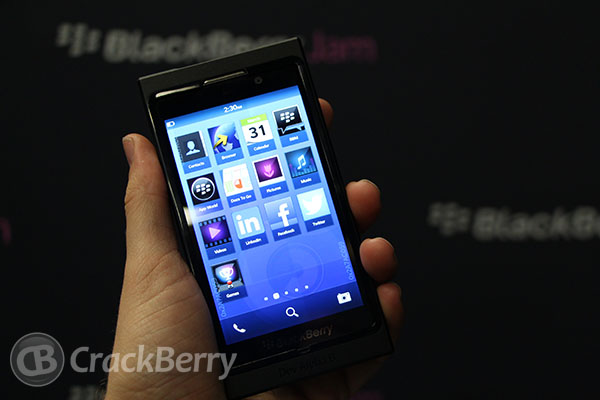 CrackBerry had the opportunity yesterday to get an early hands-on preview of the BlackBerry 10 Dev Alpha B device that will be given to developers in attendance at BlackBerry Jam Americas.

Beyond the hardware, we also got another great look at the upcoming BlackBerry 10 operating system in action, which this time we can both talk about and actually show you. And in true CrackBerry style, we're not just bringing you one hands-on video of BlackBerry 10 in action, but two.

While BlackBerry 10 has been kept very well under wraps to date, the videos and photos below provide a much better feel for what we can expect of BlackBerry 10 when it hits the market early next year.

In this video, yours truly takes the helm of the device, walking through this BlackBerry 10 preview on the Dev Alpha B.

And in this video, Research In Motion's Michael Clewley takes us through the BlackBerry 10 experience on the Dev Alpha B.

And one more. In this video you can check out the Time Shift camera app feature of BlackBerry 10 in action for real!

If you're wondering why a Dev Alpha B? it's because RIM ran out of Dev Alpha devices, of which 5,000 were originally made. Both devices deliver the same experience to developers, though there are some differences.

Visually, the external casing of the Dev Alpha B is slightly chunkier with squared-off corners, and features a removable battery door. There's also a raised lip at the bottom of the front of the phone (which we found can make the swipe up action a little trickier than on the Dev Alpha).

The BlackBerry 10 Lock screen is fun to play with :)

The version of the BlackBerry 10 OS that is featured in this post is more feature complete than the version developers will receive on their Dev Alpha hardware. And yes, what we're looking at here more closely approximates what the we experienced when we went hands-on with the real BlackBerry 10 phones that will be hitting the market next year. So when we wrote about the 10 Things We're Looking Forward To in BlackBerry 10 so far, you can now see exactly what we're talking about.

There are a lot of little details here that we can micro-analyze, so for now we'll focus on the big changes and features that were highlighted to us during our briefing.

Lock Screen - Turning the device on, you can now see the useful and fun lock screen experience we spoke of in our earlier hands-on preview. Dragging your finger from the bottom up unlocks the display, and as you move your finger you can literally see through to the OS. The OS will open back to wherever you left off. Quick access to the camera is available through the lock screen, and there's also a preview of message notifications and upcoming appointments. One cool feature that we discovered that's not shown in this video is that you can also swipe down from the top on the lock screen. This will bring you to Bedside mode - it's literally like closing the curtains "good night!" on your phone.

Horizontal Scrolling in App Drawer - On previous looks at the BlackBerry 10 home screen, the main app drawer of application shortcuts scrolled vertically. This has been changed to horizontal panes, which we think is smart. You can also jump panes and rapid scroll through panes. So if you have 5 panes of apps, you can literally go straight from the first one to the fifth one in a tap.

Active Frames - When apps are open but minimized, they appear on a dedicated pane on the home screen, where up to the most recent eight running apps are displayed. These are now referred to as Active Frames. Not widgets. Not live tiles. Active frames! Active frames show useful information as decided by the developer. Essentially when an app is a built, the developer can choose what information they want displayed to show in the active frame. And it can be dynamic. For example, with BBM, the Active Frame will update to show you your most recent incoming message.

BlackBerry Hub - BlackBerry Hub is the new name for the unified inbox on BlackBerry 10, which is a fitting name given that it's so much more than an email inbox. The gesture to jump into the BlackBerry Hub has changed too since what was previewed in May at BlackBerry World. Previously, the gesture was to move from the bottom right corner of the phone and push your way into the inbox. Now you swipe up from the bottom of the phone and then move your thumb to the right. It's a little tricky to explain in words, so be sure to watch the videos. We think it's a brilliant change though. It's more a natural movement for the thumb, and there's this subconscious feeling that the the BlackBerry Hub is ALWAYS there underneath whatever it is you're doing. You can always just pull back the app you're in and it's there.

The BlackBerry 10 Hub is much more than a unified inbox

As for the BlackBerry Hub, it really is much more than unified inbox. BBM, SMS, Facebook, Twitter, Linked in all integrate into it. From the main messages area you an even swipe down to reveal upcoming calendar appointments (awesome feature!). At the launch of the BlackBerry 10 developers will be able to tie into the Hub for delivering notifications, and soon after will be able to tie right into the native Hub.

Quick Settings / Menus - Swiping down from the top of the phone of the screen reveals a quick settings menu. As for menus, with no physical "menu button" on BlackBerry 10 phones, the menu button is represented throughout the operating system via a graphic with three little dots. Core app functionality will mainly be displayed at eye level, but additional features and options are accessible via this menu overflow button. When tapped, the menu slides in and can we swiped away. It's a really clean implementation.

One-Handed UI touches - A great example of the one-handed friendliness of BlackBerry 10 can be found in the web browser. Instead of putting the url bar at the top of the display, where it's out of easy reach of your thumb, it's been moved to the bottom of the browser. Simple. Brilliant. As you use the operating system, you really get that sense that for being a big touchscreen phone, they're doing everything they can to make it feel small, in the sense that everything of importance is accessible from your thumb.

Movies, TV Shows and Music can be purchased within App World

One of the features we were most excited to see unveiled was an updated BlackBerry App World, which now features the ability to directly purchase Music, Movies and TV shows. That's right, BlackBerry has a full content ecosystem that makes sense! This has been one of our wishes for a long time now - to be able to make content purchases beyond apps and games using your BlackBerry ID.

This means video and music purchases can be made via paypal, credit card and even by carrier billing. This also means only needing to manage one account - none of this separate accounts and apps for the 7 Digital Music Store and Rovi Video Store. Finally!

BlackBerry Messenger gets a BIG overhaul for BlackBerry 10

With ~50 million BlackBerry Messenger users worldwide on current BlackBerry 7 and older Smartphones, it only makes sense that BBM would get a major overhaul for BlackBerry 10 (have to get the BBM-addicted user base out there to upgrade to BB10 phones asap!).

We're loving what we see here, including the treatment to BBM Groups, which does a much better job at surfacing a lot of the functionality that is currently buried beneath the menu button on BBM. Pictures, Lists and Events are brought to the display layer and take advantage of the active frame functionality found on the BlackBerry 10 homescreen. For example, if a new picture is posted to a BBM group, the newest picture will display on the Active Frame within the Picture's active frame on the Group's homepage.

We were also told that BlackBerry ID now plays a roll in BlackBerry Messenger. So instead of having to setup your BBM list separately (backed up from email address or SD card), it'll all be managed by your BBID. So once you login to your device with BBID, your BBM contacts will all be there.

Still So Much More To Come...

If you're reading this and haven't checked out the videos yet, go and watch them now! If a picture is worth a thousand words, these videos are worth a million. There's a lot of little details in there that give a great idea of how the BlackBerry 10 experience is all pulling together.

What's really exciting is that while we are getting a chance to see a lot here, there is still so much more for us to see as BlackBerry 10 gets ready to hit the market. And it can't come soon enough!