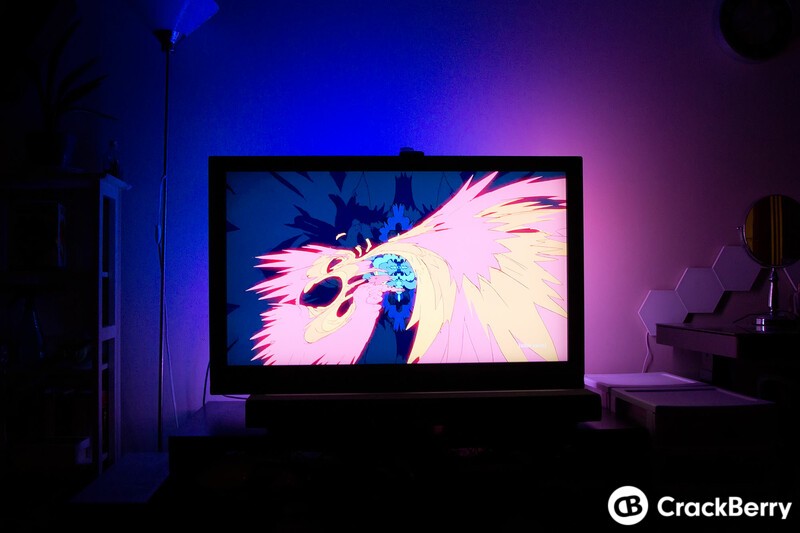 I've been using smart lights to spruce up my TV watching for awhile now, going all the way back to this 2013 Kickstarter for a backlighting system. Since then I've been able to add in Hue and Nanoleaf lights to flesh out immersive experiences when watching shows or playing games. Govee has become another big name brand in this sphere. They've had a lightstrip system that uses a camera to scan what's happening on-screen in real-time to do its work. When every other smart light relies on a desktop companion app, this stands out. Let's take a closer look at what Govee's TV Backlight T2 brings to the table.

The Govee TV Backlight T2 is able to provide ambient TV lighting for a wider range of sources than many alternatives. Since it's using a camera, you can get extra lighting from gaming consoles, Chromecast, and any other set-top box. The camera looks kind of awkward perched on your TV like a limp gargoyle, but you'll be too blitzed out with the kaleidoscopic chaos of your show to notice.

The box comes with a big spool of LED lights, a dual-lens camera, a connection hub, wiring, and handful of adhesive mounts. The back of the lightstrip has an adhesive you peel off, then apply after some cursory cleaning. You can get sets that are long enough for either 55-65-inch TVs, or 75-85-inch TVs. Mine is a meagre 46 inches, which resulted in some annoying curves and overlaps behind the TV, but luckily it's a shame that will largely exist out of sight. My TV is also a little on the chonky side, making camera mounting a hassle. They include some double-sided adhesive to keep it in place at least. The previous generation Govee TV backlight allowed you to have the camera chill at the base of your TV and look up instead, which I prefer, if only to avoid the eyesore.

Once all the hardware is in place, you can get rolling with the mobile app. A quick installation from your favourite app store and pairing over Bluetooth gets you rolling. I've tried Govee's wall tiles before, and they had a very handy set-up wizard that was noticeably absent this go-around. You need to calibrate the camera so its scanning regions are properly lined up. They include these orange spongy targets to slap on your TV to help, but really, so long as you indicate the edges of the screen frame, you're fine.

The other Govee lights I have set up at home are wall tiles, and I've typically found that even at their lowest brightness, they can be a bit too much. Combined with jagged transitions when you have animations running, and some challenges with colour accuracy, I had a lot of trepidation going into the Backlight T2.

For starters, Govee's preponderance towards brightness works really well in a backlighting situation. If it's just a lamp, excessive brightness will just melt your face off while you're walking into the kitchen. On the back of your TV, however, you need high brightness to adequately bounce off the back wall. This can help get a little something when it's still fairly light outside. That said, the one catch with a camera-based system like this is that if your TV is exposed to direct sunlight, it'll screw with the backlight colours.

The animation of the backlights is smooth, and colour accuracy is better than the wall tiles I've dealt with before. The app allows you to pair those wall tiles to the camera capture, which would be nice if they were less jagged with their transitions. Like other Govee lights, the Backlight T2 can sync up with audio as well. This works really well if you've got someone in the house who likes dancing, but since that's not me, all I'm really left with is foreboding security concern that all of my smart lights are listening to me, and now an internet-connected camera is scanning my PC screen.

The mobile app ties into Google Assistant just fine, so I can fire up the backlight as a normal smart light with my voice alone, regardless of whether I have a show on the TV. Besides that, the features available through the app are dizzying and on the verge of overkill. A newer feature is called "Snapshot", which lets you manually identify one batch of lighting settings so you can activate it with one touch, or through voice. You can build your own animations with as much effort as you care to invest, including segment-by-segment lighting. A bunch of preset palettes can help you get started if you're not feeling creative. Labelling these palettes based on moods like "sweet" and "chasing" is a little weird, not to mention using pictures of different foodstuffs like "shrimp meat" as a basis for a colour scheme. Shoehorning a whole social/community section and a storefront into the app adds to the list of unnecessary features.

I have become altogether spoiled with having my entire living room explode in yellows and oranges whenever something goes BOOM on a show I'm watching. Generally, I find having more broad lighting synced up has a greater impact than backlighting systems, but the high brightness of the Govee TV Backlight T2 gives it the power to make a big contribution to your entertainment ambiance. The colour quality is great, and the reproduction is responsive. My inconveniences like an ugly camera mounted on top of your TV and a bloated app are easy things to forgive for the final product.

Ambiance for every show

A small compromise to the looks of your TV set-up can produce a glorious ambient light show no matter what source you're watching from. The Govee TV Backlight T2 is a serious upgrade to your viewing experience.