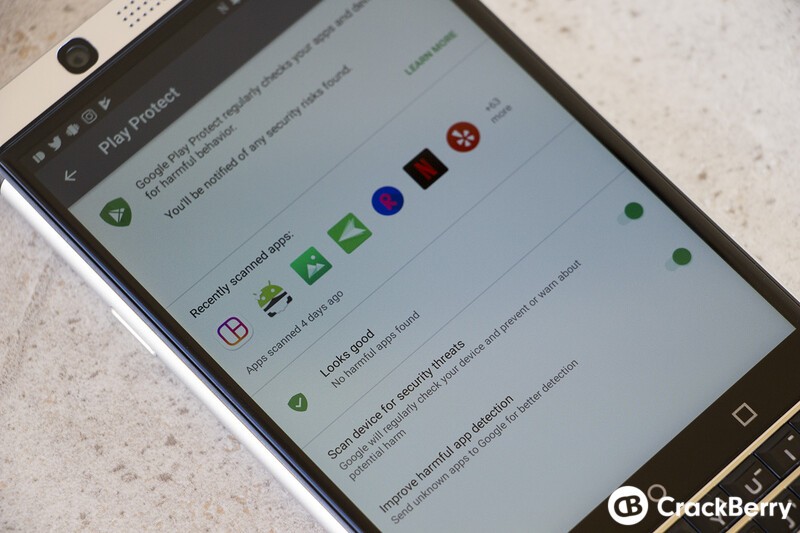 If you're using a BlackBerry smartphone powered by Android, chances are you got an update recently from Google and didn't even notice it. Initially announced at Google I/O, Google has now begun rolling out their new security system, Google Play Protect, on any phone with the latest version of Google Play Services.

With more than 50 billion apps scanned every day, our machine learning systems are always on the lookout for new risks, identifying potentially harmful apps and keeping them off your device or removing them. All Google Play apps go through a rigorous security analysis even before they're published on the Play Store—and Play Protect warns you about bad apps that are downloaded from other sources too. Play Protect watches out for any app that might step out of line on your device, keeping you and every other Android user safe.

At the core, Google Play Protect is not much different than the 'Verify Apps' system that was already in place and protecting devices in the background but now, folks can tap into Settings>Google Settings>Security>Verify Apps then Google Play Protect and get a visual interface of what is happening. The UI lets you know where you can find out more info, how many apps were recently scanned and when the scan took place. Plus, it lets you if everything is fine or if there are any issues.

Google Play Protect has appeared for me on a Priv, DTEK60, and KEYone thus far but if you're not seeing it as of yet, don't worry, it'll turn up soon enough. Once it does, take a look around. By default, the 'scan device for security threats' toggle is turned on and best to leave it that way. The 'Improve harmful app detection' toggle is off by default, but you can enable it if you wish. You can check out Google's announcement post to learn more about Google Play Protect.