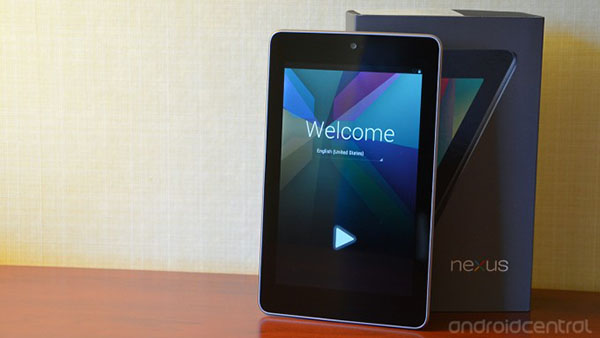 It's been rumored for quite some time now but finally Google has taken the covers off of their Nexus 7 tablet at Google I/O 2012. Android OEM's have been making 7-Inch Android tablets long since before Android supported a tablet based UI but this one is different for a few reasons.

Not only does it carry the "Nexus" branding but Google has also made it the first device to launch with Android 4.1 Jelly Bean, the latest and greatest OS from Google. It's built by ASUS who has credible history in the tablet market and it certainly has the specs and price points to win some folks over but it also seems to stagger in a few areas as well, depending on how you want to look at the situation.

An "iPad killer" it is not. However, there isn't really any denying the fact that it will be chasing down the Kindle Fire, BlackBerry PlayBook and Nook tablets to choke off some sales. Google clearly has an ecosystem strategy here meaning, they've gone ahead and put the focus on all that Google offers.

Apps, Movies, Music, Books and now even Magazines are at the forefront of the Nexus 7. They've wrapped it all up in a cost-effective package with the 8GB version coming in at $199 and the 16GB coming in at $250 plus, $25 to spend on Google's Play Store for apps and a free copy of Transformers: Dark Of The Moon.

All that said though, it's still Android at the core. If you were never really into Android before, there doesn't seem to be any over compelling reasons to jump to that ship right now. Especially for PlayBook owners who enjoy BlackBerry Bridge, Remote Control and the PlayBooks fabulous multi-tasking capabilities. Plus, stopping at 16GB on a device meant for consuming content? I'm sure that was a cost saving measure but still, seems rather silly. What do you all think? Anyone been following the rumors previously and now ready to go all in on the Nexus 7? Sound off.

Learn more about the Nexus 7 at Android Central