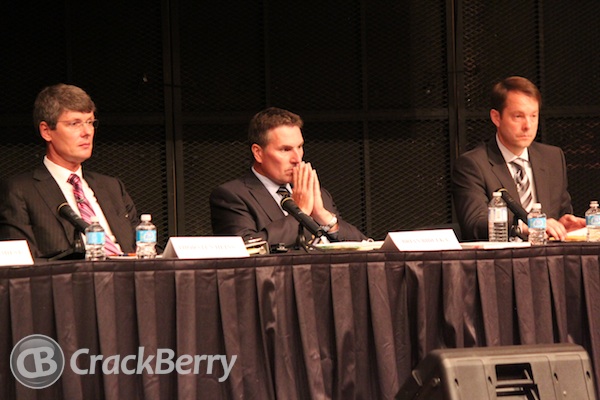 ** UPDATE ** When I wrote this story I gave RIM a hard time for cutting off the Q&A session too early. There were a few reports suggesting that many people were still lined up at the microphone when RIM ended the meeting. After speaking to a few more people and reading commentary from people who were in the room, I clearly reported incorrect information. The only people left at the microphone were repeat questioners. And when you read the post, you'll see how little value came from those particular questions. So, to RIM I apologize for an incorrect accusation. *

This morning, in Waterloo, RIM held its AGM.  We did a live podcast (we'll post it up shortly) while piping in the audio feed from the meeting, and in all honesty, it was mostly a non-event.  Not a heck of a lot happened of interest.  Nothing particularly new was brought to the light, and RIM management mostly spent time reiterating information that was already communicated in the past.

Thorsten did a reasonably good job of expanding upon the reasons for the delay in BlackBerry 10.  It boils down to what he considers to be an exceptional job by the software team in coding a large quantity of new capabilities, thereby making the integration of code a much bigger job.  Whether or not this is the entire truth, one thing is for certain:  the entire CrackBerry team agreed that RIM is doing a good job of owning its own delay rather than passing the blame onto a supplier.  Remember the last time that Jim and Mike blamed the delay on chipset availability?  Thorsten doesn't pull that kind of stunt.

The Q&A session was, in my opinion, the most interesting part of the AGM.  Unfortunately one guy kept wasting time by asking about the risks of RIM computers getting compromised by Chinese hackers.  Had it not been for him maybe someone else would have asked two other intelligent questions.  But it is what it is.

I blame RIM here, because they cut off the Q&A session very prematurely.  There were, by estimate of people present, about 20 more people lined up to ask questions when RIM pulled the plug on the meeting.  That's bad form.  When your stock is under significant pressure and investors are publicly calling for the resignation of board members, you should take shortcuts with your AGM.  Let people rant.  More importantly, give plenty of frank answers.

Not to mislead you - RIM did give frank answers, and I think Thorsten comes across as very genuine.  But they shouldn't have cut the meeting off with so many people still looking to ask questions at the microphone.

The stock market clearly wasn't impressed by RIM today.  The stock ended the day down almost 5%, putting it within spitting distance of another all-time low.

RIM's market capitalization is now a mere $3.7 billion, which includes $2.2 billion in cash.  Another metric to look at is current assets minus current liabilities, which stands at positive $3.4 billion ($3.7 billion if you include cash that has been invested with a +12 month time frame).  On top of this, RIM as property, plant and equipment worth $2.7 billion on the balance sheet, most of which consists of land & buildings rather than quickly depreciating technology equipment.

Any way you slice it, RIM should be worth a lot more than its current market capitalization.  But investors, on average, believe that the company will not be sold, not be broken up, and will burn cash as it shrinks towards irrelevance.

We anxiously await the launch ... as does Kevin's barber.