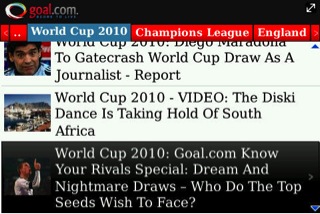 The Goal.com mobile application was announced today, just in time for the FIFA World Cup Draw. The app will deliver instant news including breaking news, World Cup 2010, Champions League, England, Italy and Spain. Articles can be saved from within the app and sent via email or to social networking sites. There is also a "my feeds" tab so users can set custom feeds with news or team-specific items.

Goal.com is known for its colorful, in-depth editorial content and breaking news, covering all the major international football leagues including The World Cup, Premier League, Serie A and La Liga. Its team of live, on location reporters publishes up to 125 articles per day in more than 17 languages around the world, including English, Spanish, French, German, and Italian.

To download the Goal.com mobile app, just head to m.goal.com/app from your mobile device.