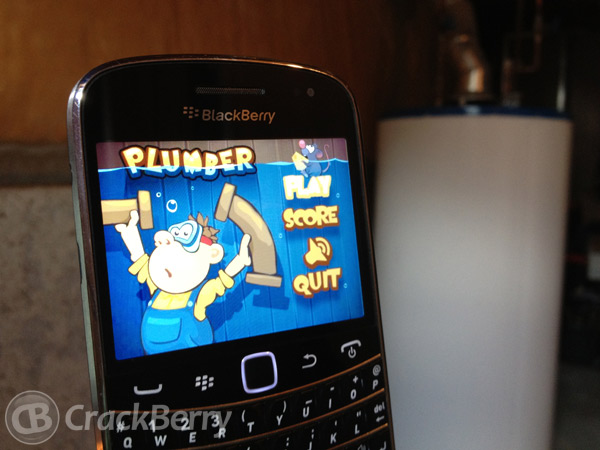 The gaming market is exploding on the BlackBerry PlayBook as games like Angry Birds Space and Lara Croft make their way onto the tablet. At the same time we also can't forget about BlackBerry smartphones. During my daily stroll through App World I noticed that RIM had a new game featured in the carousel called Plumber, so I decided to give it a try. The concept of the game is relatively straightforward: you're a plumber and you want to ensure that all the pipes are connected. Just make sure you don't get in over your head with flooding water.


As a newly made plumber, your mission is to connect pieces of the pipe, so that the water can flow from one side of the screen to another. As soon as a player manages to do that and turns on the water, a new puzzle with new pieces of the pipe will appear on the screen. Please, keep in mind, that your time is limited and that your score depends on the number of the pipes (puzzles) you will manage to do!

Plumber features almost endless gameplay, with the ability to change the difficulty as you become a master plumber. One thing that I wished this game had was online leader boards and/or BBM integration. Something I've found is once a developer puts either leaderboards or BBM into their game the chance of it going viral increases tenfold. If you have ever played Pipe Dream on the PC (a windows 98 game mind you) then you should feel right at home racing against time in Plumber for BlackBerry smartphones. Plumber is available for most BlackBerry smartphones running OS 4.5 and higher and can be found for free in BlackBerry App World.