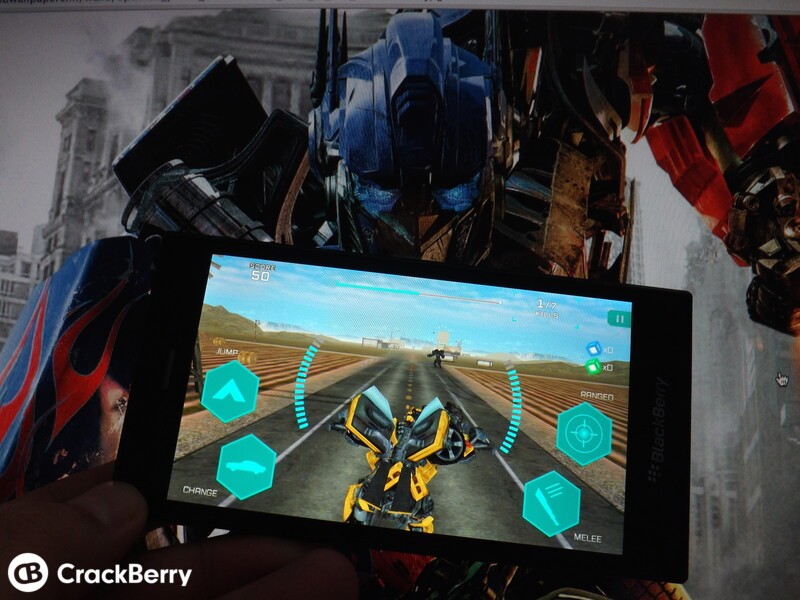 While hanging around in the Amazon AppStore this week I came across Transformers Age of Extinction and was rather excited. Growing up with Transformers toys it only seems natural to be excited by this one. However, as with all Android apps that I download for my BlackBerry 10 device I didn't get too pumped up until it was loaded and working.

It needed a reboot and then I was stoked as the game really is a beauty - and free to download! You take on the role as a Transformer in the 3D combat runner style game. - killing and dodging the bad guys that are out to get you.

You will get a choice of character to play with however you will need to unlock these as you progress. When it comes to the game play this thing rocks. You have four main control tabs on screen. Over on the left is your jump and transform one. The latter allows you to transform into a vehicle, therefore letting you to speed past the enemy and to them - clever stuff.

Over on the right are your combat tabs - one to shoot rockets and the other will swipe your sword from side to side. Moving left and right is achieved by using tilt controls and this suits me just fine.

If you like action packed games this one is going to be super exciting for you - trust me. It's fast, great on the eye and all round carnage - one for the boys I would imagine.

Give it a try and see what you think? I used the game on my BlackBerry Z3 only. I'm pretty sure this one won't run on Q Series devices but if you try it and it works please sound off in the comments.