I haven't used a Seidio case since the old BlackBerry smartphones. I never really felt like picking one up for a BlackBerry 10 model, I kind of didn't want to add bulk to the larger device. However, when I saw one become available for the BlackBerry Priv, I picked one up straight away. I thought I'd give it a try again. If you've been thinking about picking up this case for your Priv, read on and see if it's the case for you.

Let's start off with the case itself. It is made from durable polycarbonate material and it comes in two pieces. The main case encloses your phone and another piece snaps onto the front to still allow for the slider to function. The Seidio Surface cases are generally of a slimmer and sleek design, though it is slightly bulkier than the BlackBerry Slide Out Hard Shell case.

Even though it has a slim design, I feel that Priv is protected enough if I were to ever I accidentally drop it. The front piece is raised enough that your screen won't touch the surface if you lay it face-down and the camera module on the back also won't touch the surface when placed on its back as the cut out around the camera module is raised too. All buttons can be accessed easily and I had no issues using them even though they were covered. There are precision cutouts around the headphone jack and charging port at the bottom, making them accessible, too.

The interior of the case has a felt lining that will protect the back of your phone while it's in there. The outside of the case has a soft-touch coating, very similar to the texture on the actually back of the Priv, this gives the case some grip and you won't feel like you'll drop it at any point. 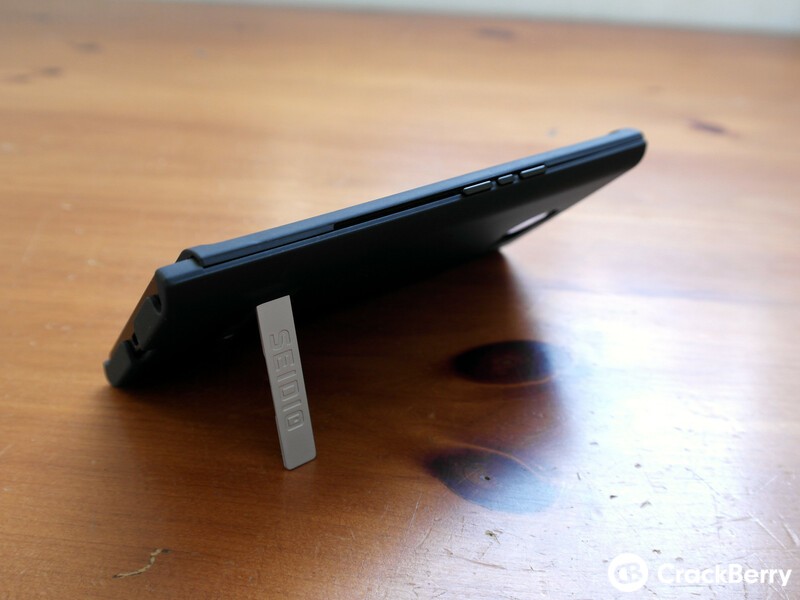 One thing I have found is that the sliding mechanism catches a little when I slide it up. It requires a bit more force to push the slider up. I can't just flick my thumb up as I usually would without a case. I have to guide it all the way up instead. This is something you get used after doing it a few times but it would be nice if the slider could still work smoothly. It's not too big of a deal for me. Whilst typing on the physical keyboard, I don't find that the case interferes the typing experience. I can comfortably hit the keys on each end without any bother.

This Surface case also has a metal kickstand, and that can certainly come in handy at times. The kickstand comes out with ease: just slip a nail underneath the metal piece with the Seidio logo on and out it comes. When you're done just slot it back in place. I've used it a couple of times on the train and at home to watch a quick video or two.

The holster is designed to hold your Priv face-in, so the holster has the same soft-felt lining, found on the Surface case, to protect your screen from scratches whilst in transit. The belt clip is a durable spring clip that rotates 180 degrees. The top spring clip that holds you Priv in place is extremely touch and you can rest assured that your phone will be securely locked in place. Whilst the spring clip is touch it has a nice quick-release function allowing you to get to your Priv with ease. The holster does have a sleep magnet, which is always helpful to get a bit more juice out of your battery.

I don't really have any major gripes with the case, maybe just one or two minor things. While I thought that I would find it too bulky, but even with my small hands I've been happy with it. I'm attributing that to my prior ownership of a BlackBerry Passport, and that's probably made me used to holding something wide in my hands. Though the Surface case is no way as wide as the Passport, I think that's what it boils down to in my case. There is a bit of added weight too and again having owned the Passport Silver Edition, which I dropped and bruised my foot, I'm used to carrying around something of that weight. So, while those things are good for me, if you don't want to add too much bulk and weight to your Priv, this case won't be for you.

If you don't mind those things, I recommend this case. It has a nice, sleek design, lovely soft-touch finish and will protect your phone during any mishaps you may encounter. I can attest to that — I have twice knocked it off a table. Mind you the floor was carpeted, but knowing my phone was protected gives me peace of mind. I have yet to see how it fairs on hardwood flooring on concrete, though.

If you want to know what the minor issues are for me. The first one is that on the top of the case, on the front piece, there's not place for it to clip onto, due to the slider design and so you will find that it sometimes looks like the case is coming off. It's a minor thing and you really won't notice it unless you constantly inspect the case but I thought I'd point it out nonetheless. The other thing is that the case does attract fingerprints. A quick wipe down makes them go away, though.

If you don't mind a bit of bulk for the sake of protection, this is a case I highly recommend. Many people swear by cases like this from Seidio, especially their Surface line and their Priv case is top notch in my book. The soft-touch finish offers a nice grip to the case and even with cold hands I never feel like the device gets slippery. The kickstand a pretty neat hidden, handy function and you'll be surprised how much you end up using it.

The Seidio Surface case comes in two colors - black and royal blue. You can buy the case on its own or with the holster from ShopCrackBerry today.